So, cool news on the Beastly movie. Mary-Kate Olsen has been cast as Kendra, the witch character and Neil Patrick Harris has been cast as Kyle's (the beast) blind tutor. I'm loving this cast and can't wait for this one to be released!!! 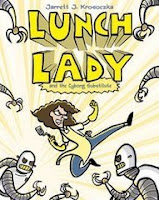 There's a graphic novel series coming out this summer about a lunch lady who is also a little bit of a superhero. I first heard about the series over at Welcome to my Tweendom. The first book isn't even out until July, but a movie is in the works with none other than Amy Poehler set to star. This is awesome news and my hopes are high for this one to be hysterical.

Wendelin Van Draanen's novel Flipped is headed to the big screen. This book has been on my TBR list for awhile, so now I need to read it before the movie! Adult stars that in talks to be part of the film include Penelope Ann Miller, Aiden Quinn and Rebecca De Morney. With Rob Reiner set to direct, I'm looking forward to this one.

So, this isn't YA, but it has a YA connection. The Elizabeth Gilbert (sister to Dairy Queen's Catherine Gilbert Murdock) memoir Eat Pray Love is hitting the big screen with Julia Roberts and Javier Bardem. It's not out until 2011, which gives me plenty of time to catch up on my reading!

Ok, and how did I not see this until today? I admit, I don't know much about Astro Boy, but I know that this movie will most likely have the graphic novels flying off the shelves at my library. The animation looks awesome. Plus, Kristin Bell aka Veronica Mars is the voice of Cora, and I think she rocks!