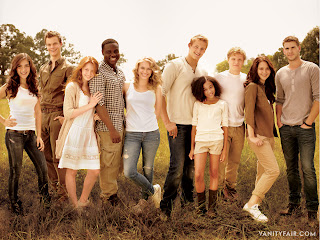 -The cast of The Hunger Games posed for a photo with Vanity Fair. The article featured a great photo slideshow of Katniss, Peeta and Gale, (Peeta is just so cute-love him!!) as well as an interview with Jennifer Lawrence.
-New York Times has a great behind the scenes slideshow of the upcoming film Hugo.
-Gotham Group has acquired the rights to the novel Where Things Come Back by Cory Whaley. My friend Heather read this book and loved it, so I can't wait to read it!
-Publishers Weekly reported  that Davis Films has acquired the rights to P.C. and Kristin Cast's mega-popular vampire series House of Night.
-J.K. Rowling revealed this week that she nearly killed off Ron Weasley! I'm so glad she didn't-he's one of my favorite characters!
-Once Upon a Time has been given a full season order from ABC. I like the show, but Mr. GreenBeanSexyMan and I both wonder how they'll continue the story past a season. I also really liked the premiere of Grimm and loved that the aunt was a librarian!:) Did you watch either one?
-If you're hooked on Pretty Little Liars, good news! Pretty Little Liars will return on January 2 followed by The Lying Game on ABC Family.
-Lots of Hunger Games news from Cynopsis Kids:
Scholastic unveils plans to publish a fourth movie tie-in title for The Hunger Games movie, which opens in theaters March 23, 2012. The newest title, The Hunger Games Tribute Guide, a guide to the 24 Tributes featured in movie, will release on February 7, 2012, the same day as two other previously announced tie-in titles, The Hunger Games: Movie Tie-In Edition and The Hunger Games: Official Illustrated Movie        Companion.  Another already announced tie-in title, The World of The Hunger Games, will be released simultaneously with the movie.Additionally, a special gift edition of The Hunger Games, The Hunger Games Collector's Edition, featuring a foil slipcase and new Mockingjay artwork, cloth cover, and deckled edges, releases this month.  The Hunger Games is the first book in the young adult The Hunger Games trilogy created by author and TV writer Suzanne Collins.