March 03, 2012
Did you see the first clip from The Hunger Games?? I can't wait!! Suzanne Collins also posted a letter to fans saying she's "really happy" with the film!

-My favorite news of the week: Fox 200 has hired Brian Percival of Downton Abbey director fame (and many other Masterpiece episodes!) to direct a film version of The Book Thief. I think this is perfect-anyone else?? Thanks to Shelf-Awareness for the news!

-Remember how the Harry Potter DVDs went in the vault and can't be purchased? Well that's about to change with the release of the Harry Potter Wizards Collection. No news on what's inside, but it better be cool-the set costs $500!

-Emmy Rossum is in final negotiations to play Ridley in Beautiful Creatures! I think this would be a great casting job and I'm getting very excited for this movie!

-The CW has a pilot based on the novel The Carrie Diaries and cast AnnaSophia Robb as young Carrie. Thanks to Cynopsis for the news!

-The CW also has a pilot based on the novel The Selection. They recently cast Ethan Peck as the Prince and Sean Patrick Thomas as an advisor to the Queen. Thanks to Cynopsis for the news!

-Sherlock Holmes seems to be a big draw right now, and CBS is jumping on the bandwagon. They have an updated Sherlock Holmes starring Johnny Lee Miller as Sherlock and Lucy Liu as Watson-yep, a female Watson! I'm not sure if this can compete with the BBC's Sherlock, but I'm willing to give it a try. Thanks to Shelf-Awareness for the news.

-In other Hunger Games news, there's a game coming to Facebook and the poster was released this week. I don't play Facebook games, but I'll play this one! 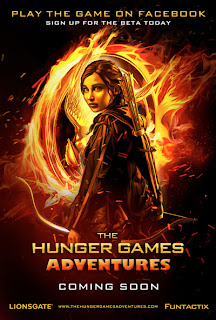 -Tiger Eyes by Judy Blume is getting the big screen treatment and Entertainment Weekly has your first look. This movie was directed by Blume's son, and the two worked together to co-write a script. This is the first big screen version on any of Blume's novels.

-Amy Tintera used to work in Hollywood-and now her novel will be turned into a movie by Paradigm, the company she used to work for. Her debut novel, Reboot, sold to HarperTeen. Keep an eye out for it!