Where are the Kickbutt Girls Without the Romance?

June 24, 2013
My library was chosen last year to be one of YALSA's Galley Groups, which means our teens get to read and review advanced copies of books to include in YALSA's Teens Top Ten.

One of my galley group teens came into the library last week to pick out a new book to read. As she was browsing the shelves of ARCs, she asked me "where are all the kickbutt girls in YA without the romance? Every YA book has to have a romance plotline! Why can't the girls just be awesome?" She then picked up an advanced copy, read the cover copy, and sighed "See? This one would have been so good before it got to 'and then she meets boy' here."

Her comments got me thinking-where are the awesome girls without romance? Now, I love a good romantic plot, but I also love when it doesn't overshadow the characters and the story. I got to thinking about some of my favorite kickbutt awesome girls, and they all have a romantic story to them.

Alina (Shadow and Bone)-another awesome girl, but with romance in the story

Bitterblue (Bitterblue)-she's a pretty awesome character who stands up to her advisers, but she also has a romantic interest in one of the characters as a side plot

Ismae (Grave Mercy)-she's an assassin nun, but that doesn't stop her from falling in love

Katniss (The Hunger Games)-she's caught in a love triangle

Katsa (Graceling) -she has a relationship with Po, and while I don't think it overshadows her awesomeness, it's still a big part of the story

Wally (Dark Eyes)-Her romance may not end well, but it's still part of the story

Those are just some of my recent favorites that I immediately thought of when she started asking about awesome girls in YA. The more I thought about it, the more I had trouble thinking of some really awesome kickbutt girls with no romance featured. The only recent book I  could think of was Code Name Verity: 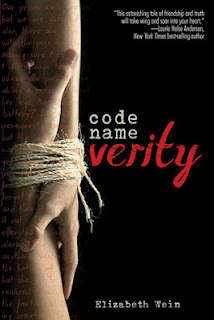 That led me to think about Elizabeth Wein's list of Top Ten Dynamic Duos in Fiction , which as she pointed out on Twitter, was sadly lacking in girls.

So where are our the kickbutt awesome girls? They don't need to have romance in the story to make it work, so why do we keep including romance in their stories?

Can you help me think of any other awesome girls without the romance?