So You Want to Read Middle Grade: R. J. Anderson 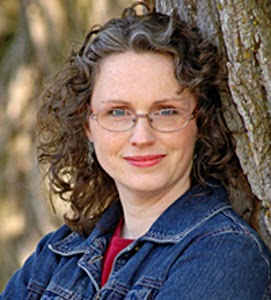 R.J. (Rebecca) Anderson is a UK-bestselling author for children and teens, including the Knife and Swift series of faery books for age 11 and up. Her latest book is Nomad (Orchard Books UK, January 2014), which may or may not include kissing. Visit her website (http://www.rj-anderson.com) or follow her on Twitter (@rj_anderson).

A few years ago, someone asked me whether I read romance novels. Well, I have read a few, and even enjoyed some of them. But I wouldn't consider myself a regular reader of the romance genre, so what I said was, "I don't read romances. I read mysteries for the romance."

What I forgot to add was that I read Middle Grade novels for the romance, too.

I can hear some of my audience sputtering already. Romance, in stories for 8-12 year olds? Inconceivable! Everybody knows that readers of this age deplore "kissing books". They want action, adventure, stories about pets and friends and family -- not a lot of drippy grown-up feelings. Oh, sure, a crush on the girl or boy next door might add a little something to the narrative, but anything serious means it's a book for teens or adults, not Middle Grade. How can anyone say they read MG for the romance, when it’s barely even there?

And yet when adult readers start talking about best-loved literary couples, it doesn't take long for someone to bring up Meg Murry and Calvin O'Keefe from A Wrinkle in Time, or Anne Shirley and Gilbert Blythe from the original Anne of Green Gables trilogy [1]. And when those same readers reminisce about favorite scenes from the books, they're more apt to mention young Anne breaking her slate over Gilbert's head or the clumsy first kiss 14-year-old Calvin gives Meg in Wrinkle than any of the more conventional romantic moments that come later.

I think this shows that even when it comes to teens and adults, what grabs readers isn’t the physical payoff but the spirit of the relationship between two characters, the sense of chemistry and potential between them. [2] And MG novels can create that sense of deferred longing and anticipation just as well as any other genre -- or better.

Even in books for the youngest of MG readers, there are stories where the love of two children is a central and motivating aspect of the plot -- as in Anne Ursu's Breadcrumbs, where Hazel's yearning for her best friend Jack drives her to undertake a perilous journey to save him. [3] There are MG books that deal with romantic betrayal and heartache, such as The Penderwicks at Point Mouette where Jane falls for a boy who turns out to be less perfect than he seems (though as usual with the Penderwicks, there's a whole lot more happening in the book than just romance). There are MG novels where the attraction between characters, though understated, is powerful as any adult romance (as in Alan Garner's The Owl Service, where Alison, Gwyn and Roger find themselves unwittingly reenacting an deadly love triangle from Welsh legend).

There are even popular MG novels – albeit usually of the fantasy genre, which gets more leeway due to the faery tale influence – which feature older teen or adult characters who fall unequivocally in love with each other, kiss on-page and/or get married in the course of the stories. [4] When I wrote my debut novel Knife (known in the US as Faery Rebels: Spell Hunter), I thought the story's central romance meant it was only suitable for older teens or adults. But Knife and its sequels (which also feature teenage protagonists and strong romantic subplots) were marketed as MG on both sides of the Atlantic, and I've received e-mails from eight and nine-year-olds who’ve read and enjoyed the whole series. Some of the most enthusiastic letters were from boys.

To my mind the chief difference between MG romance and YA or adult romance is not its depth or seriousness, but to what extent it’s allowed to dominate the plot. To me, the most satisfying and memorable romances involve two people who care deeply about something bigger than each other, and are drawn together by a shared commitment to that common ideal or goal. In that sense, a great romance has the same basis as a great friendship -- and what genre places more value on friendship, or explores it more fully and frequently, than MG?

Ultimately the very constraints of the Middle Grade genre, in which plot is never an optional extra and characters are compelled to act rather than merely brood, make it ideally suited to creating the best kind of romance -- relationships based on the meeting of true minds and kindred spirits, not mere impulses and hormones. MG romances tend to develop slowly and subtly, sometimes over multiple books, which makes them feel more credible and leads to greater emotional investment than the "Boom! And they were in love" shorthand that's often found in YA and adult novels. It's harder work for the MG writer who’s actually trying to write romance, because it takes patience and a light hand. But as anyone who's visited a fan forum for the Harry Potter or Artemis Fowl or Percy Jackson books can attest, even the tiniest hints of connection or attraction between characters can be enough to get young -- and older -- readers dreaming up a whole epic romance for themselves.

Some parents fret that including romantic elements in an MG novel is too much, too soon. I suppose that depends on the maturity of the child in question, and what kinds of conversations they've had with their parents already. [5] But I can't think of any MG romances I've read that struck me as potentially dangerous. Because the characters in MG tend to be younger and often going through an awkward phase of development, there's a lot less blathering about physical attributes, and more focus on the personality beneath. And what healthier message is there to share with young readers, than that loving someone means a lot more than just thinking they're pretty?
What about you? Do you have any favorite middle grade romances?

[1] Which, despite Anne's growing up to marriageable age over the course of the trilogy, is far more of a "kindred spirit" to MG than YA on the whole.

[2] Case in point: Lord Peter Wimsey and Harriet Vane, whose dance of love is almost entirely verbal, intellectual and conducted at arm's length. Yet they also invariably show up in readers' lists of top romances as well.

[3] Admittedly, we're never told that Hazel's love for Jack is romantic, and it may well turn out not to be; but there's no question it's a deep and powerful love, stronger than any of the "grown-up" relationships in the book.

[4] Proof that such stories appeal even to the youngest readers: a few months ago, as I was reading Lloyd Alexander's Prydain Chronicles to my eight-year-old son, he became more and more agitated and anxious to know how the story would end. When I asked him what he was worried about, I expected to hear about the dangers and enemies Taran was facing. But instead he burst out, "Are Taran and Eilonwy ever going to get married?"  We think kids, especially boys, aren't interested in the "mushy parts" because they squirm and make faces. But the truth is they're often keenly curious about romance, and just too shy or self-conscious to admit it.

[5] Though many young readers are already dipping into the YA and adult sections of the library and have probably read much more racy stuff than their parents realize. When I was attending sixth grade way back in 1980, half my classmates were reading Flowers in the Attic.