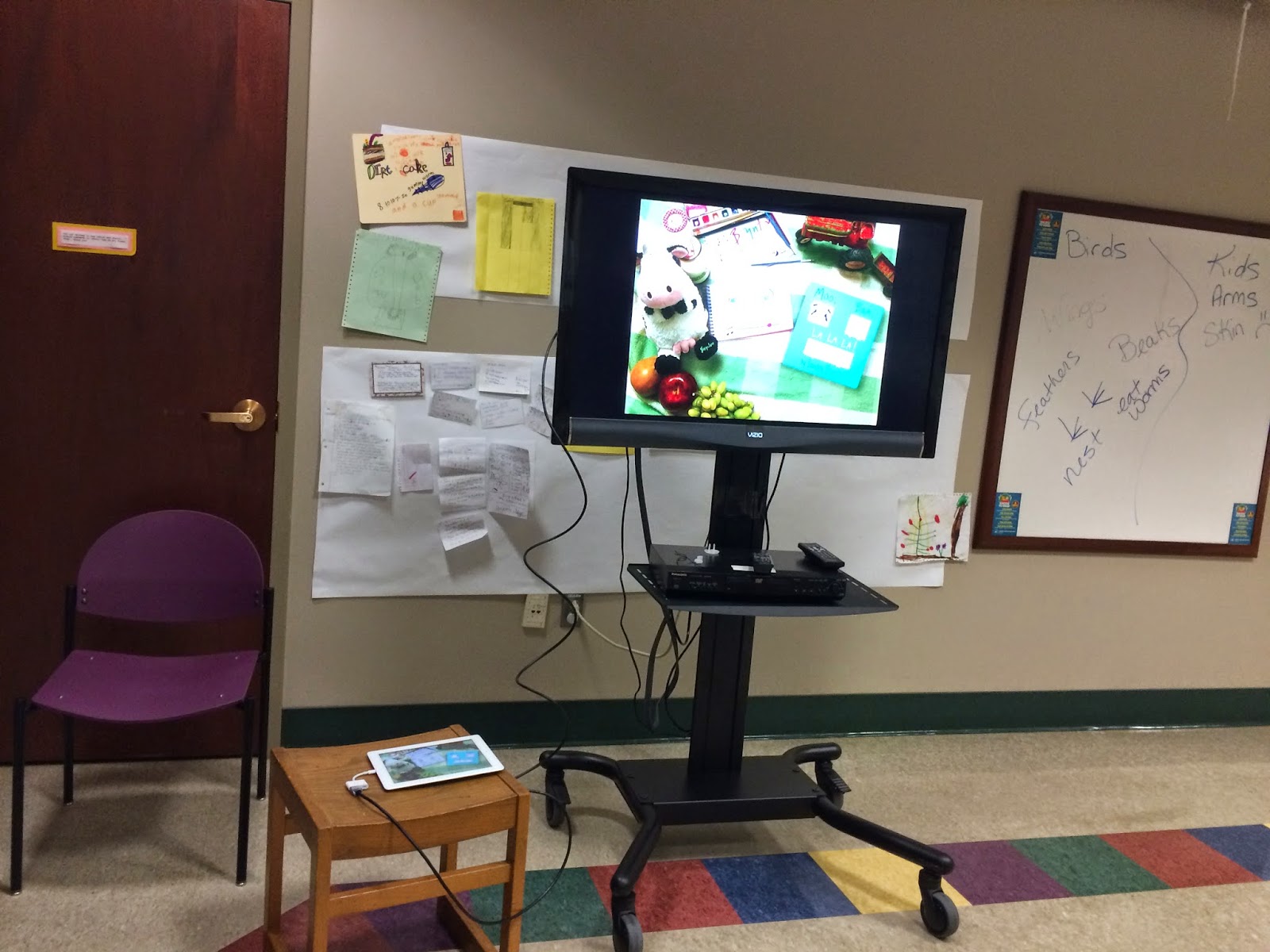 So this past weekend, I was proud to finally give my library's fist digital storytime. We've been working towards digital storytimes for awhile so I was thrilled to have the chance to debut them as part of our Summer Reading Program this year.

To set up the storytime, I used an HDMI cable to attach the iPad to a large screen TV. This was very easy to do and a great way to project the apps to the group. It also gave me an easy way control the apps without having to worry about running the apps upside down or moving the iPad around the room so everyone could see. It did make me a bit more limited in my mobility, since I was tethered to the TV, but overall I felt that it worked out well.

I decided to go with an animal theme for my first digital storytime. I wanted to use a lot of apps that were very interactive since my goal with our digital storytime is to promote the interactive nature of apps and the benefits of interacting with your child and screen time instead of using the screen and child alone.

Moo Ba La La La-Sandra Boynton-$3.99-I opened with this one and used the read myself option but used the animal sound effects and animations along with the story. The kids liked the animations and the story was a familiar, so it was a good opener and a nice way to ease into using a digital component.


Five Green and Speckled Frogs-Software Smoothie-$2.99-I created a felt board story of this song (inspired by Cen Campbell of Little eLit!) and stored each felt board page in my photo stream. The kids were in awe of the felt board on the big screen and we counted each of the frogs at the start of each verse. They loved that the frog "jumped" into the water. I think this was my favorite app to use and I can't wait to create more felt boards on it. I'm terrible at crafts and making cute felt boards, so I think this is a nice alternative for non-crafty people like me.

-Animal Sounds From the Farm-Curious Circus-$.99-The kids love this app. I've used it in other storytimes as well as Digitots and it's always a huge hit. I asked the kids what the animal sound would be and then pressed the name of the animal and then the animal itself for the sound. The animation is simple and the animal sounds are wonderful. I have several parents ask me about this one and want to download it for themselves each time I use it.

Feed the Animals-Paper Boat Apps-$1.99
-Since I had a small group, I was able to have each kid come up and choose what food they thought an animal would eat. They were great about taking turns and loved having the chance to play with the iPad themselves and watching it project onto the big screen. This one does go to a "you earned a new sticker" page after several animals, but I just skipped past it easily. It also does have some ads pop up after awhile, but they're easy to close out of.


Bunny Fun: Head, Shoulders, Knees and Toes-Rosemary Wells-Auryn-(available in Stories Alive, price unavailable) I first played the song and had the kids sing and dance along. Then I had them gather up by me and told them we could record our own version of the song. Using the microphone and record option on the app, I recorded the kids and I singing the song. I then recorded the kids themselves without my lead. The parents clapped and the kids loved that they were part of a performance.

Toca Band-Toca Boca-$2.99-I ended with Toca Band and again giving each child a chance to play with the app. Each child chose something or someone to place in the band and we listened to the song we created.

I was a bit nervous as to how the kids and the parents would respond to a digital storytime. Would the kids be engaged? Would the parents find it boring? I was very pleased with the response from both the kids and the adults. The kids loved watching the apps and familiar songs and stories appear on the big screen. They loved getting a chance to feed the animals and play with the Toca Band and interact with the iPad. And the parents really enjoyed that the kids got involved and they got to sample some new apps. Overall it was a great first digital storytime and I can't wait to do more!

Have you done any digital storytimes? What apps are your favorites?