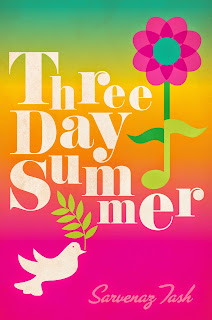 About the Book: (from Goodreads) Michael is unsure about most things. Go to college? Enlist in the military? Break up with his girlfriend? All big question marks. He is living for the moment and all he wants is a few days at the biggest concert of the summer.
Cora lives in the town hosting the music festival. She's volunteering in the medical tent. She's like that, always the good girl. But there is something in the air at this concert and suddenly Cora finds herself wanting to push her own boundaries.When Michael and Cora meet, sparks fly, hearts race, and all the things songs are written about come true. And all the while, three days of the most epic summer await them...

I am excited to welcome author Sarvenaz Tash to GreenBeanTeenQueen! Her newest book, Three Day Summer, is all about Woodstock. She captures the atmosphere and the music and I wanted to know more about the music in the book and the playlists she made to get inspired to  write. I love this playlist and listening to it gets me in the mood for summer (and to read Sarvenaz's awesome book!) Be sure to check  out the rest of her tour stops as well!

It will probably come as no surprise that I love the music of the 1960s. And although I myself was a teenager during the bizarre grunge/pop hybrid that was the mid- to late ‘90s, I actually spent most of my high school years listening to this music instead.

I made two Spotify playlists to go with my Woodstock love story, Three Day Summer. One features the songs—and in some cases, some of the very performances—that my two main characters Cora and Michael hear during the festival itself. The other I like to refer to as my “’60s milieu” playlist, and I filled it with not only some of my favorite songs of the decade, but some of the tunes that I think best embody the many facets of it: from its socially conscious anthems to its feel-good pop to its trippy soundscapes. (I do have one strong caveat: Beatles songs are not available on Spotify and that’s the only reason they are not included on this list!)

Here then are the songs I chose for the Three Day Summer—In the Mood soundtrack (followed, of course, by the playlist itself!):

“Turn! Turn! Turn! (To Everything There Is a Season)” The Byrds
Between the out-of-this-world harmonies and the profound lyrics (partially taken from the Bible no less!), this is just one of those songs that makes me feel calm, reflective, and peaceful. I thought it was fitting since the peace sign is one of the most enduring symbols of the 1960s.

“Happy Together” The Turtles
True to its title, this song just makes me feel toe-tappingly happy and, I think, is indicative of the some of the best pop to come out of the decade. Plus it’s about being head over heels in love which, of course, also goes along with the book.

“Piece of My Heart” Janis Joplin
I’m not sure it’s possible to find a more gutsy and gut-wrenching performance of a song that’s both about heartbreak and about girl power. (This line: “I’m going to show you, baby, that a woman can be tough” is a particular favorite to belt out in the shower! Amiright, ladies?). Janis plays an important role in the book and she performed this song at Woodstock too!

"America” Simon & Garfunkel
Another song with harmonies that slay me in the best way. I also think the lyrics portray both the hope and the heartache that came with the changing face of what it was to be young in 1960s America.

"You Keep Me Hangin’ On” The Supremes
The sound of Motown was a huge, indelible part of the 1960s and The Supremes were for sure the queens of it.

“Build Me Up Buttercup” The Foundations
Yes, this has played at every Sweet 16 you’ve been to since the beginning of time (or, at least, since 1968) but there’s a reason for it: you simply must sing and dance along to its unshakeable beat.

“Somebody to Love” Jefferson Airplane
From another Woodstock performer, I love the contrast of this song to the one before it and I think it’s a great example of some of the more psychedelic sounds of the decades. Plus lead singer Grace Slick is another fantastic rocker chick that embodies the feminist spirit of the decade.

“Don’t Worry Baby” The Beach Boys
You can’t love the ‘60s without loving the beautiful harmonies of The Beach Boys and this one is one of my very favorite love songs of theirs . . . that also just happens to be about drag racing.

“These Boots Are Made for Walkin’” Nancy Sinatra
Remember all that girl power I mentioned before? In the age of Gloria Steinem and Betty Friedan, this kiss-off anthem just fits right in. Plus I know that Nancy wore a lot of fabulous go-go boots to perform it—and what is more ‘60s than that?!

“Joy to the World” Three Dog Night
The lyrics don’t make a whole lot of sense (why is this person friends with a bullfrog?!) but you can’t help singing along anyway as this ode to the world is quite joyous indeed.

“I’m a Believer” The Monkees
Full confession: The Monkees were my first-ever concert (see the first paragraph of this post) and I’ve adored them for practically as long as I can remember. Though they started out as a made-for-TV Beatles parody band, they ended up with some truly spectacular songs in their oeuvre. This bouncy number is a particular favorite.

“Bad Moon Rising” Creedence Clearwater Revival
Also performed at Woodstock, this song comes in at a key point in the story. I also think it has a particular rock/bluegrass vibe that was a big part of the ‘60s sound.

“Time of the Season” The Zombies
I find this song both sultry and trippy, which I think showcases yet another facet of the decade.

“My Generation” The Who
The ultimate anthem for the teen population of the 1960s? I think so! Of course, I’m not sure how the Who feel now about belting out lyrics like “I hope I die before I grow old” but I think that it’s hard to find a song that better embodies the universal feeling of being young and misunderstood.

“A Change Is Gonna Come” Sam Cooke
A song that remains as beautiful and pertinent today as it did when it came out, Cooke was directly singing about the civil rights movement of the 1960s and the hope for a better tomorrow that led so many to fight for equality.