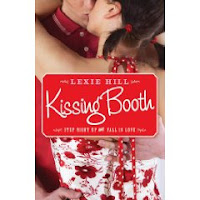 About the Book: Lisi is an NBK - she’s never been kissed. Lisi would really like to be kissed by her crush, Brett, who also happens to be the most popular guy in school. She doesn’t think her chances are very high, since Lisi in not in the "in" crowd.

After the popular fly girls make the Kissing Booth their main target for competition, rumors start to fly and the kissing booth crew just might have gotten themselves in too deep. And Lisi just might be falling for the wrong guy.

GreenBeanTeenQueen Says: Anyone who knows me knows I’m a sucker for romances, and I couldn’t resist the adorable red and white cover for this one! I loved the idea of an old-fashioned kissing booth and wished I could go to the Spring Carnival with Lisi and her friends. Even though the story is mainly a romance, there’s also a sub-plot on friends growing up and growing apart that I thought added some depth to the story. I liked each of the characters and thought they were all well drawn-even the popular crowd was somewhat likeable.

KISSING BOOTH felt like it could have been a script for a great romantic comedy (which I also love), and was a perfect feel-good book that left me smiling. I would recommend for readers who like light romantic fiction.