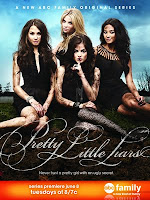 I was invited to play in ABC Family's Pretty Little Liars Secret Keepers game to help promote the June 8th premiere of the show.

I was sent a free Driod phone and I'm playing as Emily. 'A' has been texting me almost every day with a new mission I have to complete or else one of my secrets gets spilled-and I so don't want that to happen! Some of my more recent missions have been harder-I had to actually call Emily's boyfriend-ACK!! And today involved some counting and message boards and I'm hoping I was right with my answer that 'A' won't reveal my secret. And not only is 'A' sending texts saying she's going to spill if we don't do what she says, but she comments on our Facebook posts-she's everywhere and she always seems to know what's going on!
I'm friends with many of the secret keepers on Facebook and reading about their missions I know 'A' has it in for me and I'm going to get a really hard mission soon. Plus, it's really freaky getting mysterious texts from 'A' saying she knows what you were really doing last night instead of studying at the library and you better complete her task-or else! Let's just say I'm glad I'm not the real Emily-and I completely understand how the girls would be freaking out!
One of the fellow Secret Keepers is Cinnamon who blogs at A Journey of Books. She had a great idea to feature the Secret Keepers on her blog throughout the contest-and she has great posts about her missions. She's not in my group (we're all playing in mini-groups of four), so I can cheer for her to win and she's playing as Hanna and has had some pretty tricky missions from 'A'.
I'll be blogging about my Secret Keeper updates, but you can also follow me on Twitter for updates. Let's hope I can keep my secrets hidden!