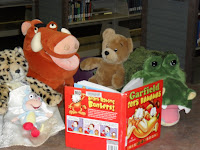 This past weekend my library hosted our first Stuffed Animal Sleepover. It was a huge hit and we plan on making it an annual event. This wasn't an original idea-I actually got the program idea from the YALSA list-serv. But I thought I'd share how we ran it at my library.

Friday evening kids brought in their stuffed animals. We started at 7, but I think next time I'd start earlier to give the teens more time for photos. We had about 25 kids bring in stuffed animals and we gathered in the storyhour room for a short storytime. Teens from the teen library council helped the kids fill out a permission slip for their animals with questions like "name of animal" "type of animal" and "animals favorite activities/hobbies". I then got the group together and we did a song with the animals-I used They Might Be Giants Clap Your Hands, which is fun and easy to do with the stuffed animals clapping hands, etc. but it is a bit short.

I had some leftover crafts from storytime earlier that day, so we had the kids make "nightlights" for the animals since they would be spending the night at the library. The craft was a yellow star glued onto a black piece of paper and then colored any way they'd like. Make sure to have lots of white crayons for the black paper and have the kids write their names on the craft!

After all the nightlights were made and permission slips filled out, we got back together to read a book. I had each of the teens from teen library council introduce themselves and say something about their animal. (I pulled animals and puppets from our storytime supply for the teens to use.) One of the teens volunteered to read Goodnight Moon and I read Knuffle Bunny. We ended with singing Twinkle, Twinkle Little Star and then said goodbye to the animals. I was a bit worried about getting everyone out in time for the teens to get pictures taken, but everyone left right as we ended.

Now the fun began!! The teens broke off into groups and took the animals all around the library. Each group took photos of their animals and we added all the photos together to make a giant slideshow. We did groups, but some of the cameras didn't load with the computer we had. So I would suggest taking one (or two) cameras that you know will work with the computer, take a small group of animals, take a designated amount of photos with those animals, and then come back and get the next group as you load the photos on. I think this would go much smoother than the system we had! 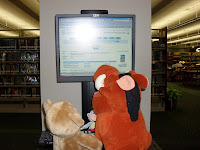 The next morning the kids came back to pick up their stuffed animals and see what kind of adventures they had the library! I'm also adding the photos to our library Facebook page. 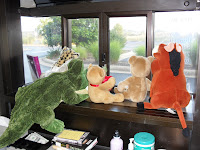 The parents loved it and asked if we could do it again. The kids laughed so much at the photos and thought it was so much fun to see their animals all around the library. I also liked that this program got the teens involved and the kids got to see the teens helping out at the library. 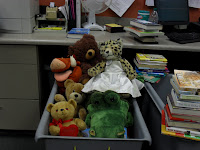 This was a fun all ages program and I can't wait to repeat it next year!