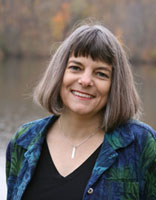 Please welcome Cinda Willams Chima to GreenBeanTeenQueen! Cinda is the author of The Seven Realms Series which just released book three with The Gray Wolf Throne. The Seven Realms Series is one of the most talked about fantasy series at my library-seriously, my teens love it! They've been talking about it since book one, which made Mr. GreenBeanSexyMan and I both have to pick it up! The series is an engaging adventure with wonderful descriptions, kick butt characters, and magic-what's not to love? Seriously, if you work in a library that has avid fantasy readers, you need to add these books to your shelf!

I'm happy to share her thoughts on writing magic-and hopefully this inspires all you aspiring fantasy writers out there!

Magic 101
Magic is the element that distinguishes fantasy from other types of fiction. But what is magic? And how much of it do you need to call your work a fantasy? What are the keys to developing a coherent magical system of your own?

First and foremost, remember that there are more similarities than differences between fantasy fiction and other genres. Successful fantasy fiction has to nail the other elements common to fiction—character, setting, and plot. It doesn’t matter how spectacular your magical fireworks—they won’t save a lame story starring one-dimensional characters. Well-written fantasy should be accessible even to those who don’t generally seek it out.

A well-conceived magical system will enhance your story and provide endless options for complicating your characters’ lives. A poorly-conceived system will give you fits through the entire story arc and cause readers to lose confidence. So it makes sense to take some time and do it right up front.

Questions to Consider in Magical Worldbuilding
1.  Who has magic? Is it limited to a particular race or culture? Is it gender-specific? Is it present at birth or does it come on at puberty? (a common trope) Do different races have different kinds of power? Is it a matter of skill and training or in-born power or both?

In the Seven Realms series, much of the conflict comes from tensions  between peoples with differing magical gifts.

The Spirit Clans—tribal people who live in the mountains—are flashcrafters—they make the amulets and tools that wizards need. But wizards and clans hate and distrust each other, which makes it difficult for them to cooperate.

The queendom is ruled by the Gray Wolf Line, valley people who have the gift of prophesy and communication with the dead.

2.  Do non-magical people know about the magic in their world? In Harry Potter, muggles, or non-magical people, don’t know about the wizards and witches in their midst. A whole bureaucracy exists to keep them from finding out. In Holly Black’s White Cat series, magic is known, but illegal, and so magic practitioners are criminals. In Jonathan Stroud’s Bartimaeus series, magicians rule present-day Londan as a gifted aristocracy.

3.  What can and can’t be done with magic? Harry Potter is magic-intense—involving dramatic transformations. For example, people can turn into cats, lamps into animals, people can turn invisible and transport themselves over distances, and, of course, ride on brooms. In other fantasy stories, magic is a subtle thing. In Kristin Cashore’s Graceling, one character has the power of persuasive speech—can make others believe what he says and do what he wants. That may seem like a small thing—until you consider the implications.

My magical systems tend to be subtle—magic is an energy that can change the state of matter, or support healing, or create illusion.

4. Are certain kinds of magic forbidden? Is there a hierarchy that makes and enforces the rules? Are some spells so dangerous and powerful that they have been banned?

For example, in Twilight, the Volturi are the enforcement arm of the vampire hierarchy. In Harry Potter, there are three unforgivable curses: the Killing Curse, Avada Kedavra, the Cruciatus Curse, Crucio, and the Imperius Curse, Imperio.

The magical world in the Seven Realms is controlled by the Naeming, a set of rules put in place after the magical disaster known as the Breaking. For example, wizards no longer have access to amulets as powerful as what they used before.

5. What are the limits of magic? Yes, magic must have limits, or you have no story. An all-powerful character is always going to be able to get himself out of trouble—which you as the author don’t want. For instance, magic may require tools, such as wands and amulets or magic rings. If Harry Potter loses his wand, he can’t do magic.

Magic may require expensive or difficult-to-obtain materials, such as gold or jewels or innocent blood. There may be defenses against magic, such as talismans. Does magic involve complicated spellwork that requires years of study?

Consider vampires. In traditional vampire stories, at least, the power of vampires is limited because they can be driven off with a crucifix or garlic, and they can’t enter a dwelling without being invited, and they cannot go out in the daylight.  Otherwise, vampires always win.

In crafting a magical system, it’s important to consider the implications for story. If your character has the gift of prophesy, she will always be able to avoid trouble. If your character can turn invisible, that will get her out of a whole range of dangers. If she can transport herself from place to place in an instant, or communicate across vast distances, that takes a lot of opportunities for conflict off the table.

In the Seven Realms series, wizards produce flash continually, but it must be saved up in amulets in order to accumulate enough to cast a spell. Once expended, it takes time to build up again. The Spirit Clans are flashcrafters—they make the amulets that allow wizards to do magic. They also make talismans that defend against the high magic of wizards. The Gray Wolf line has the gift of prophesy, but it is limited, its meaning often obscure and difficult to interpret.  The interaction between power and its limitations creates conflict.

Cinda Williams Chima has authored two best-selling fantasy series: The Heir Chronicles (The Warrior Heir, The Wizard Heir, The Dragon Heir) with two books forthcoming; and the Seven Realms series (The Demon King, The Exiled Queen, and the newly-released The Gray Wolf Throne) with more forthcoming. You can find information about her tour for The Gray Wolf Throne and other upcoming events here http://cindachima.com/Events/events.htm.

More information and excerpts from each book are available on her website, www.cindachima.com. Help for writers can be found under Resources/Tips for Writers, including a document called, “Getting Started in Writing for Teens.”