Tween Tuesday is a weekly meme hosted here at GreenBeanTeenQueen to highlight great reads for tweens. Join the fun and post your link below.

About the Book: (from publicist): Kazu Kibuishi's thrilling, NEW YORK TIMES bestselling series continues!
Emily and her friends think they’ll find the help they need in Cielis, but something isn’t right.  Streets that were once busy are deserted, and the townspeople who are left live in fear.  Emily is soon escorted to the Academy, where she’s expected to compete for a spot on the Guardian Coucil, a group of the most powerful Stonekeepers.  But as the number of competitors gets smaller and smaller, an awful secret is slowly uncovered – a secret that, if left buried, means the certain destruction of everything Emily fights for.
GreenBeanTeenQueen Says: I first came across the Amulet series when I first started working in the library. I noticed lots of tweens checking out the first book and coming in begging to know when book two would be released. I was curious to know what had them so interested, so I read Amulet for myself and I was hooked. This is a graphic novel fantasy/science fiction blend of epic proportions.
The characters are wonderful! Emily is a strong main character and you want to see her succeed on her journey. Emily, her brother Navi, and their mom find themselves in a strange new world (a bit like Narnia meets Gregor the Overlander) and Emily is supposedly the one who will help save them from the evil elf king.
The supporting cast is fantastic! Emily and Navin discover that their great-grandfather created all sorts of creatures/robots and each one is unique and has a personality all their own. These supporting characters are all richly developed and we meet new characters in each volume. I'm really loving the introduction of Vigo, an elderly stonekeeper who may become a strong ally and mentor for Emily, in volume four. Each volume brings a new adventure and new characters and the story becomes even more layered.
And of course, being a graphic novel, you have to mention the artwork, which is absolutely stunning!! 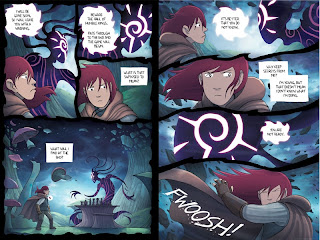 Each page draws you in and you can easily get lost in the rich details of the artwork. The fight sequences are packed full of action and it's easy to envision the whole thing playing out in front of. Sometimes the artwork makes me feel as though I'm watching a Miyazaki film-it's that detailed and beautifully animated.

Each book ends on a cliffhanger of sorts, so our adventures with Emily aren't quite over yet. Readers will have to stay tuned for the next volume, but I don't think they'll mind going back and pouring over the previous books while they wait. The series has a little bit of something for everyone-it's a nice science fiction/fantasy blend. There's magic, but there's also technology and robots. There's talking animals, elves, curses, flying ships, good creatures and bad, a new cute dragon-ish friend (another new favorite from volume four!), mysterious cities-really there's so much packed into this series the action never end! There's also a nice layer of humor, especially with a couple of the robot sidekicks, which helps the text from getting too bogged down in the drama and action.

Overall, I'd say Amulet has a Star Wars/Lord of the Rings/Howl's Moving Castle feel to it, so if you have fans of any of those, give them the Amulet series. I would even suggest this as a must have for libraries looking for great graphic novels to add to their collection-I doubt it will stay on your shelves for long!

Full Disclosure: Volumes 1-3 borrowed from the library for a re-read, volume four reviewed from final copy sent by publicist

Want to win a copy of Amulet: The Last Council? (Volume Four in the series)
Two lucky winners will each recieve a copy!
-US Shipping Address only
-Ends Tuesday, Sept. 27 at midnight CT
-One Entry Per Person