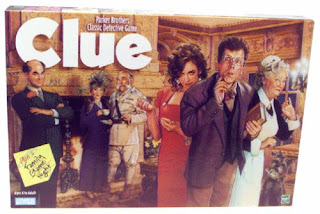 I've been wanting to do a life size game of some sort at my Library for awhile. So when this year's Big Read book was The Maltese Falcon, I knew a game of Life Size Clue would work well for the mystery theme. I sort of made up how to run the game and hopefully I can explain it well enough for others to copy. Here's what we did:

We had a room set up perfectly for the game board already. Our Storyhour Room has a tile floor with squares. Using masking tape, I tape off six rooms (the game board has nine, but I wanted to make sure the game didn't take forever if we only had a couple of teens playing). I counted off tile squares for the size of the rooms, made doorways, and made sure to include signs in four rooms that listed secret passages that would lead you directly across the game board into another room.

The rules we followed were just like the game board. We had a case file box in which we placed a weapon, suspect, and room. Then we passed out one card for each room (you could do just weapons as in the game or a mix like we did) then shuffled the other cards and passed them out to players. Players each had a detective clue sheet.We had a large box that was turned into dice and I ran around passing the di to each player and remmebering whose turn it was. This was a huge job to run around from player to player, so you might consider making a di for each player. One square on the floor equaled one room and they could move left to right and up and down, but not diagonally. They also had to enter the rooms through the doorways (or secret passages) and had to be in a room to make a guess.

When players made a guess, if other players had one of the cards, they had to show the guessing player what was in their hand. Since we were in a large room and everyone could have seen the card if they held it up, it worked best if the guessing player walked around to each player or they came to the guesser so others wouldn't see.

The game ended when someone guessed the case correctly. The entire game took about 30 minutes and the teens ended up playing four rounds they loved it so much. We did this one for tweens and teens, so we had grades 4-12 and ended up with mostly middle schoolers playing.

My teen librarian recently did another life size game with Monolopoy with the same age group and the teens played for an hour and a half until she told them it was time to stop (they were getting a bit too competitive!) We also had parents join in on that one.

We also tried a life size version of Candyland last year for the preschoolers and up at our Holiday Store open house and it worked great.