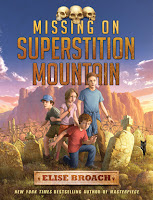 About the Book: The three Barker have just moved to Arizona. Everyone has told them not to go up Superstition Mountain, but when their cat goes missing, the boys have to find her-even if it means hiking up the mountain. When the reach the mountain, they discover three human skulls. With their pesky neighbor Delilah, they decide they are the perfect detectives to find out exactly what is happening on Superstition Mountain.

GreenBeanTeenQueen Says: Missing on Superstition Mountain is nominated for our state book award next year, so I picked up the audiobook. It's a pretty quick read (or listen) only four discs long. The story was cute and engaging and the narrator did a good job with the boys voices, although he did make the youngest brother sound really young and whiny.

I have to say that the boys in this book made me laugh. If I found human skulls while hiking a mountain, I would freak out. But instead, the boys all say "oh cool! Let's solve the mystery!" It's an adventure I think lots of tweens will wish they could go on and solve a cool old mystery of a strange mountain.

Some of the characters were a bit under-developed, but I think that's because this is the start of the series and we were left with some loose ends to uncover in book two. I didn't understand why the librarian was so rude and nosy or why the former historical society guy (can't remember his name) was bit mysterious. Hopefully we find out more in later volumes.

Overall Missing on Superstition Mountain was a fun adventure filled book that had lots of action, mystery, humor and friendship. I think it will be a popular pick on the state list and a great book talk over summer reading.

Book Pairings: On Etruscan Time by Tracy Barrett Middleworld by J & P Voelkel (both for the mystery elements)

Full Disclosure: Reviewed from audiobook CD I checked out from my library