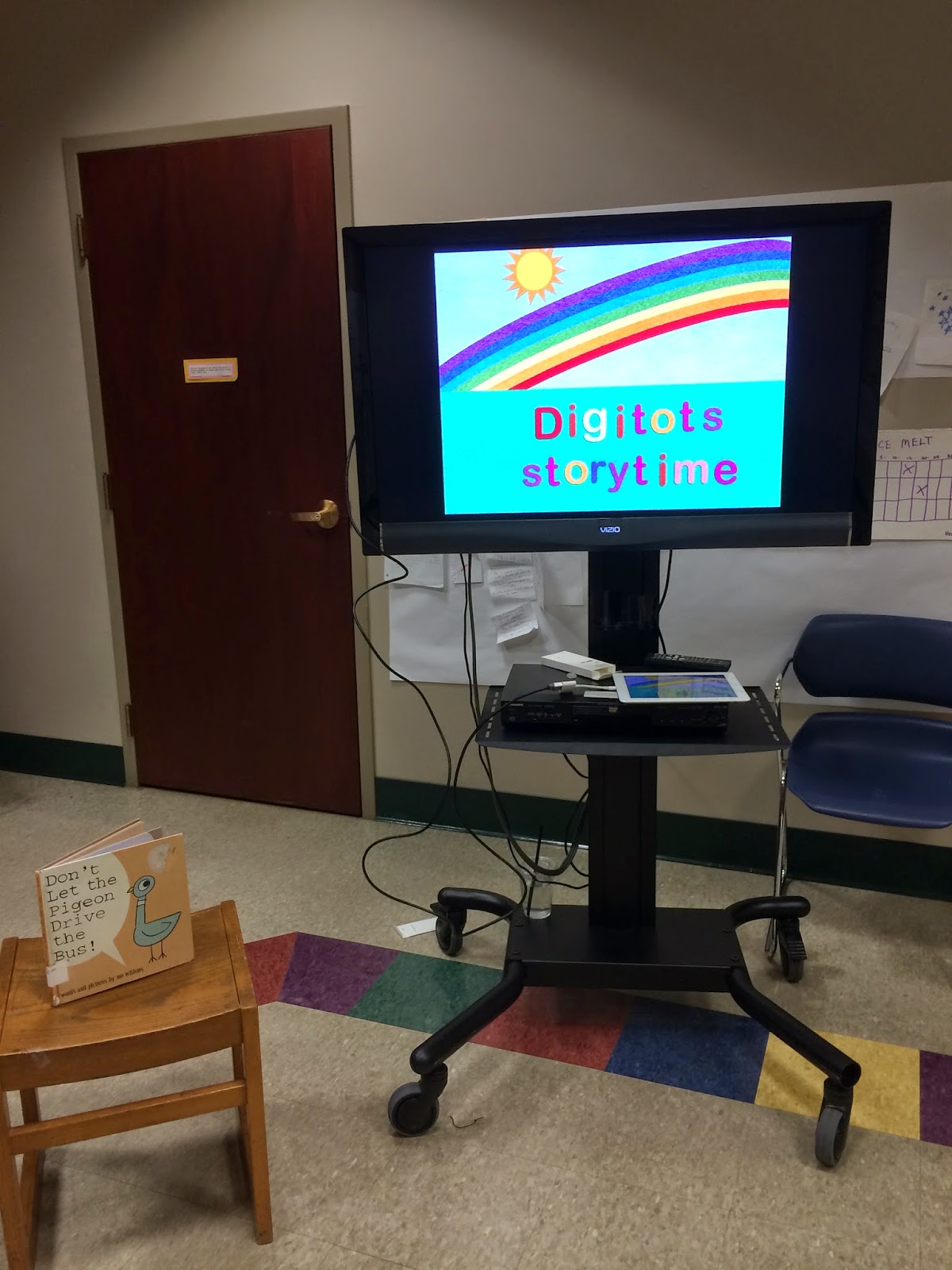 This past weekend I did my second Digitots Storytime. I am so glad my library is finally incorporating digital components in storytime and so far the response from patrons has been great. They love that we're highlighting apps for them to try with their kids, giving them a chance to see them and how their child interacts with an app, and it's a great way to model a wonderful use of media and how it can be beneficial.

For this storytime I decided to focus on more stories than game apps and modeled it much like my traditional print storytimes but using the iPad for most of my resources. I loaded my music onto the iPad so everything was all in one place. Since I didn't want the iTunes screen showing my playlist, because that's a bit boring, I used the Smoothie Feltboard app and created a screen that showed "digitots storytime" to put up when we were singing a song. (You can see it in the picture above.)

Here's my plan from this month's Digitots Storytime:

Song (played in iTunes): Doctor Knickerbocker by The Wiggles-a great movement and get ready song

Llama Llama Red Pajama-Penguin Group USA-$4.99 I used this version to read the book to the kids and used the sound effects in the story to go along with the text. The kids seemed to like it okay and I really like the slight animations on the pages without it being too distracting. It's a good one to use as an introduction to reading a picture book on the iPad. But honestly, I didn't think this app/ibook was anything special, especially for the price. The music was also too loud (I should have turned the volume on the TV down after our song) and it over powered my reading of the story at times. It's also hard to find exactly where to press on the page to get the characters to make any noise or talk, which was a bit frustrating. I also played it for my staff and we agreed that the narrator, while having a nice calming voice, wasn't that energized by the story and we all preferred the read it ourselves option.

Don't Let the Pigeon Drive the Bus by Mo Willems-I used the print version of this one because I wanted to give the kids a basis for the story before we moved into using the app. It was also a great way to integrate both print and digital text into the storytime.

Don't Let the Pigeon Run This App-Disney-$5.99-Yes, this one's a bit pricey, but it's totally worth it! You could easily do an entire digital storytime just using this app! There are three options for how you would like to run the pigeon story-a silly one made up for you, one where you choose options based on three choices, or one where you record your voice answering the questions. Since I had a younger group and I wasn't sure how shy they would be in recording their own answers, I chose the second option ("the chick") of giving them pictures to choose from and selecting those to fill in our story. The bus driver comes out and asks the group some questions and I let the kids pick what they would like the answers to be. Then once the pigeon arrived, we shook him up and he created the story we had just written together which ended up being titled "Don't Let The Pigeon Wear Purple Underwear" which the kids thought was hilarious! They loved that the things they picked ended up in the story.

I then used the "Draw the Pigeon" portion of the app. I asked the kids if they would like to learn how to draw the pigeon and gave each child a paper and crayon. Using the instructions Mo Willems give we drew along with him to create our pigeons. I drew mine on the iPad so it was projected on the screen and the kids followed along on paper. Their Pigeons turned out great! I love this option because it's a great way to connect the kids to the story as they get to create the character. It's also easy to go along at your own pace, so I could watch the group and make sure everyone was doing okay before we moved to the next step. If you can draw circles, triangles, and lines, you can draw a Pigeon drawing too!

Song: Octopus by Charlotte Diamond (played on iTunes)-an oldie but a goodie and a fun action song

Toca Kitchen Monsters-Toca Boca-Free-I wanted to end with giving the kids a chance to play one on one with the iPad instead of just watching my activities on the screen, so I ended with Toca Kitchen Monsters. We chose a monster and then each child got the chance to feed the monster. The first round the kids had fun just feeding the monster. For the second round I showed them how they could also open the kitchen and cook the food in different ways. The most popular cooking methods were the microwave and the blender and much the kids surprise the monsters ate everything they cooked! I love Toca Boca apps and they are lots of fun. If you're looking for great kids apps, be sure to check out Toca Boca. I love using them in storytime and am always looking for new ways to incorporate them.

Overall this storytime worked well and it was fine to do it without a theme. Following the format of highlighting various apps worked great and the kids didn't care that there wasn't an overall theme to the stories. The parents also commented on how they enjoyed seeing the apps I used which was great.