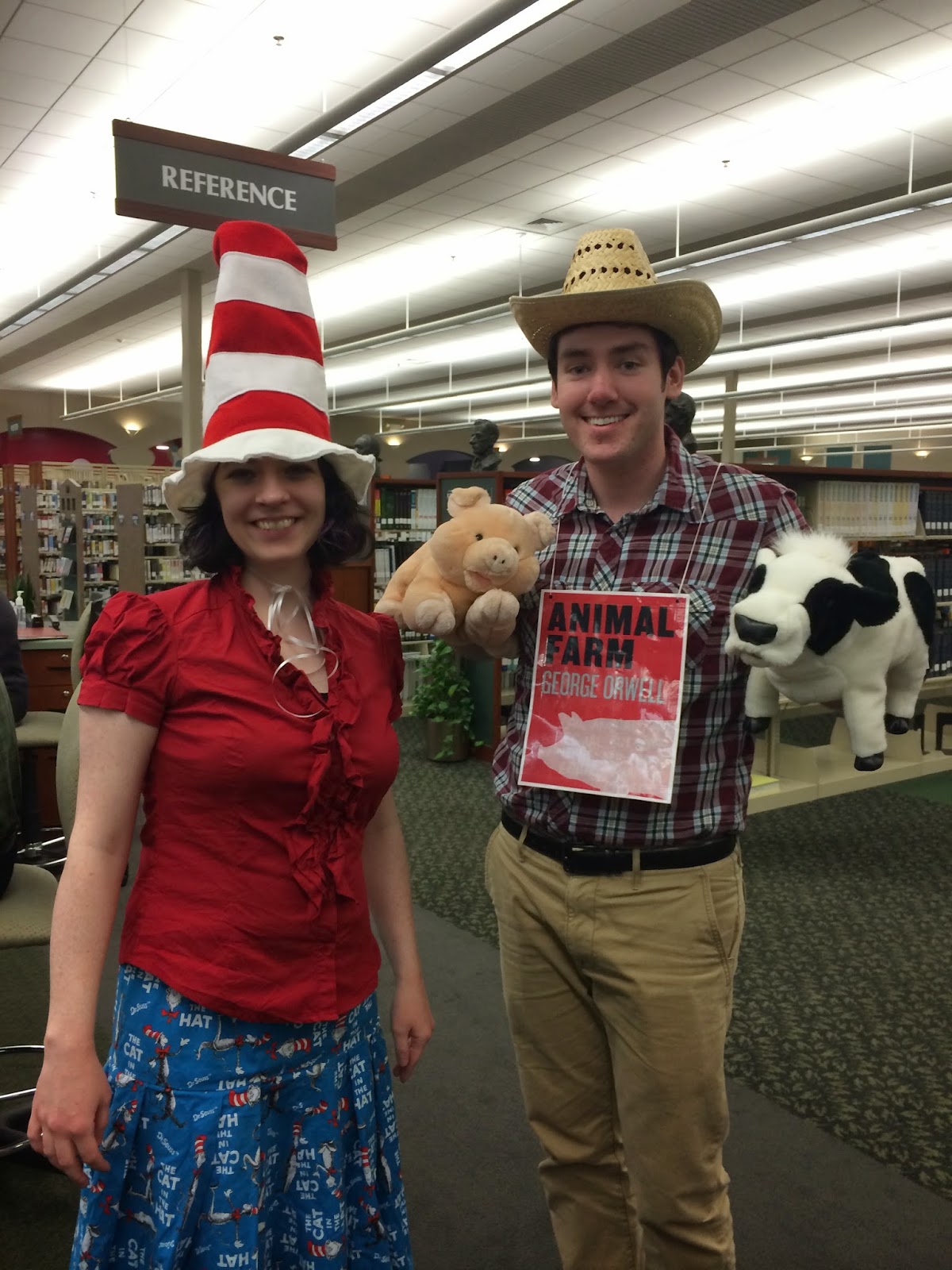 Me and my teen librarian J cosplaying as books.

So I may have been ALA Left Behind this past weekend, but at least I got to have fun at the library with our fifth annual library prom! The themes over the years have changed (Moonlight Masquerade, Geek Prom, Zombie Prom, Nerd Prom-which apparently I never posted about!) This year, my teen librarian J came up with the idea for Cosplay Prom. It was a huge hit and the most popular prom we've done so far!

Setting up the Event:

J actually did the setting up and we brainstormed ideas of what to put out to keep the teens entertained in case they didn't want to dance (which is always a possibility). He bought food supplies to make candy sushi and we also had some animal crackers out for a snack. We didn't provide drinks because it's messy and we have a cafe in the library that many teens purchase drinks from anyway, so we decided food was enough.

For activities we had easy origami owls, paper bowtie making, pin the scar on Harry, bookmark making-(choose your fandom and design a bookmark) as well as some board games, Apples to Apples and Jenga. We also had a photo booth with props from the youth services costume stash for the teens to take photos. We didn't provide a camera since we felt the teens would have devices to take photos with.

We ran music through the speakers in the auditorium and used Pandora and Songza and YouTube to play popular songs and song requests.

The teens went all out when it came to costumes! They had a blast and several commented how excited they were to have a chance to cosplay because they never had the chance to anywhere else. We had the teens sign in as they came in which helped us keep a good head count as to how many attend (around 75 teens!)

J and I made an announcement to start about what we had around the room and we kicked off the prom with some music. After a few minutes we put on The Cha-Cha Slide and that got the teens dancing-and they kept dancing all night!

About halfway through the event we held a costume contest with the help of our pages and circ staff as the judges. As the teens came in, I felt so out of touch with my teens and pop culture! I recognized some fandoms, but there were others (especially the anime) that the teens had to teach me about. The most popular fandoms were Doctor Who, Homestuck, Hetalia, and Sherlock.  Some of the teens even cosplayed as characters from books they were writing which was very cool. The costume contest winner was a Steampunk cosplayer who had created his costume the night before!

The most popular song was Let It Go, which the teens sang along to and was hilarious to watch. They also loved dancing and singing along to What Does the Fox Say, Gangam Style, Macarana, Cupid Shuffle-pretty much anything they could dance to. When we tried to play anything from a Top 40 playlist, they revolted and instead wanted theme songs and group dances. We also played themes for Sherlock, Doctor Who, Adventure Time, and a Doctor Who themed Time Warp Parody.

The rest of the night was spent dancing and singing along and playing games. The teens danced most of the night and were sad when we had to close up. They requested we repeat the cosplay theme next year as well as asked to have it more often and longer.

Overall, the event went smoothly and was a lot of fun. The only downside was the playlist. We didn't have a set playlist and tried to take song suggestions, but J and I weren't familiar with which made it hard to choose songs from their suggestion list. When we asked the teens for feedback at the end of the event, this was a big comment-that we didn't play the songs suggested. Next time I think we'll try to pre-make a playlist. The other issue this time around was the screen had to be down and projected for the computer and sound to work, so any video we played on YouTube ended up being played on the big screen. This was good and bad-it was fun to watch the Doctor Who and Harry Potter videos, but hard to manage because they could see everything that was being typed in and searched for.

The teens enjoyed having additional activities out, which was great for those that didn't want to dance but I was surprised by how much of their time was spent just singing along to whatever songs came up on the playlist.

Our proms have become an annual tradition each summer and I can't wait until next year!