KEEP YA WEIRD: Grasshopper Jungle by Andrew Smith PLUS GIveaway 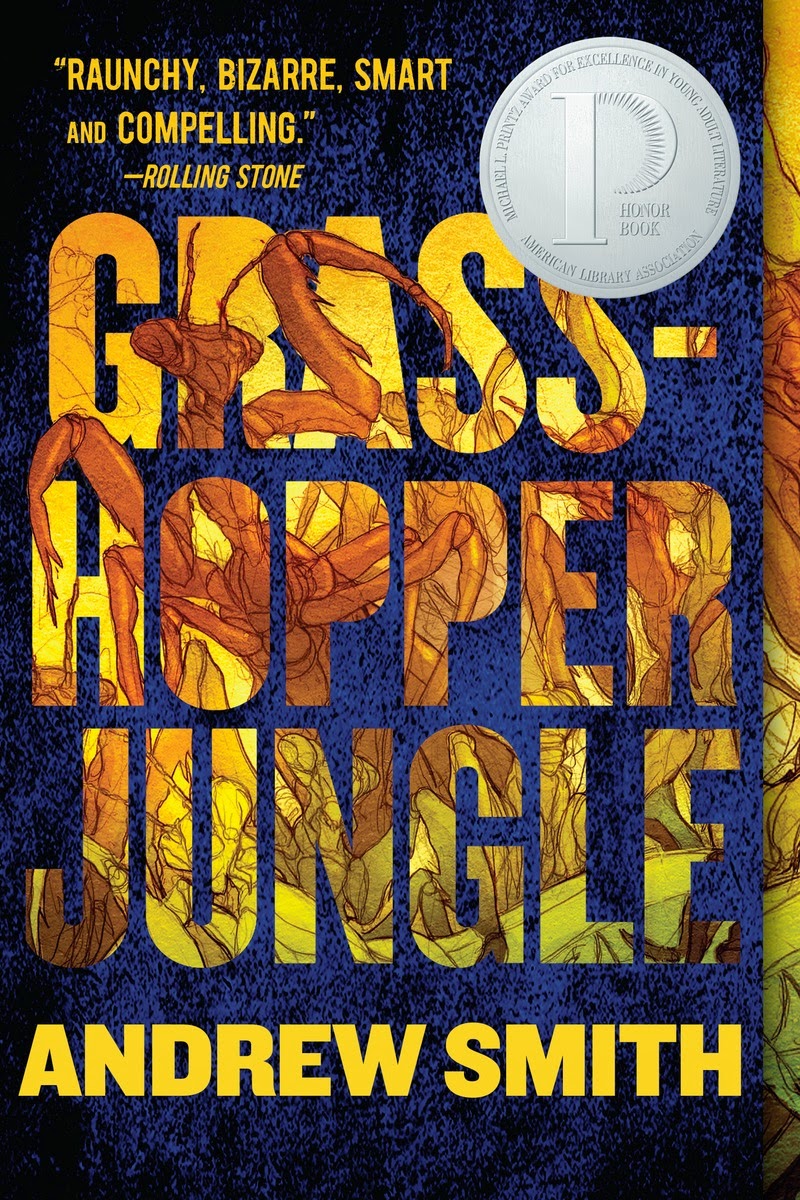 About the Book: This is the history of the end of the world. After an accident in their small Iowa town, Austin and his best friend Robby, and his girlfriend Shann, are caught in the end of the world. Giant six-foot-tall unstoppable praying mantises are hatching. It's up to Robby and Austin to save the world. But Austin is dealing with teenage emotions and hormones and is caught between his love for Shann and Robby. Survival, hormones, and giant man-eating bugs-you know what I mean.

Yes, the book is about giant praying mantises that hatch, mate, and eat as they take over the world. But that's just one part and actually it's not the biggest part of the novel. This is more Austin's story about figuring out his history, his story, and dealing with his conflicted feelings about Robby and Shann. I saw someone describe it on Facebook as a "bi-gay-straight love triangle set at the end of the world" and I think that's a pretty good description.

We recently read Grasshopper Jungle  for my book club and I mentioned how it's a bit of a "coming-of-age" novel (even though I really hate that term) and someone else pointed out that they didn't think Austin ever really comes of age. Austin is "selfish" as Robby describes in the novel and I don't know that even by the end of the book he is less selfish or any less conflicted. But that's part of what makes Grasshopper Jungle so good. There are no happy endings or easily resolved conflicts. This is a history and history is messy and confusing. Life doesn't always make sense.

I actually really loved Austin and Robby and loved their relationship. I liked Shann alright too, but I felt her character kind of got dropped about halfway through (this is Austin telling the story after all) but I would have liked to know more about Shann towards the end of the book as well. But back to Austin and Robby. Austin often refers to Robby as a hero and Robby is just so even-keeled and kind that I felt like I would be friends with Robby in real life. (I'd probably be friends with Austin too, but I think I would be just as annoyed with him as his friends are.) Robby really shines throughout, partly because of his actions and partly because of the way Austin talks about him. But Robby is a fantastic character and I absolutely loved the dialogue and the interplay between Robby and Austin.

Austin recording of history is honest and hilarious. He points out how roads converge and I found all of his recordings digging deeper into his own history as well as what else happened to have everyone end up at this moment fascinating. His job as historian is one he takes seriously and his comments are wry and serious which also makes them funny. And this is a teenage boy we're talking about here, recording a very honest history of being seventeen, so there is a lot of talk about being horny, having sex, and thinking about sex. Yet I never found any of it graphic or out of place. It fit Austin's history.
The most gruesome thing in the book is all of the bugs eating people, which would often feel very Twilight Zoney or like a B-Science Fiction movie.

There are many ways you could sell Grashopper Jungle to readers. It's a science fiction end of the world story, giant bugs who eat people, a love triangle, or a boy trying to get a handle on life and figure things out. But any way you sell it to readers, I think it will be enjoyed. It's a weird, crazy book that I had a ton of fun with.  And I'm so glad Andrew Smith is keeping YA weird.

Full Disclosure: Reviewed from galley received at ALA conference from publisher

Thanks to Penguin and Keeping YA Weird, I have a copy of Grasshopper Jungle to giveaway! One lucky winner will get to enjoy the weirdness! Fill out the form below. One entry per person, US Address only please. Contest ends March 1. And stay tuned for more Keep YA Weird giveaways and a review of The Alex Crow!