Into the Dark Series by Bree Despain

April 13, 2015
You might remember hearing about Egmont closing their doors in the US earlier this year. I was so sad to see this publisher say goodbye. I had met wonderful people at Egmont during various ALA conferences and they were always so wonderful. They were also publishing lots of fantastic books, including a series that I had enjoyed recently, Into the Dark by Bree Despain.

I am a sucker for greek mythology and Into the Dark was a new take on Hades and Persephone, which I was intrigued about. So when Bree Despain put the call out for Into the Dark Ambassadors, I knew I needed to help! I'll be posting some previews, giveaways, and other goodies about the series in anticipation of book two, The Eternity Key, coming later this month. Be sure to check out the first book, The Shadow Prince, if you haven't already! And just to refresh your memory, here's my review of The Shadow Prince and a sneak peak: 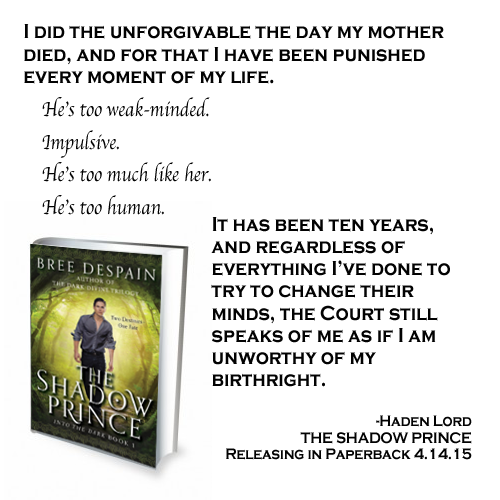 GreenBeanTeenQueen Says: I really love stories based on Greek Mythology, so when I first heard about Into the Dark I was excited but wary. The Persephone myth seems like a popular trend right now in YA and I wasn't sure how yet another offering of the story would measure up. I was not disappointed as Into the Dark has a fresh, unique take. It may be inspired by the myth of Persephone, but the story is original take on the myth of Persephone as a launching point for a new tale about the Underrealm.

At first glance, it might seem like another girl meets boy with supernatural powers romance. But don't let first impressions deceive you. Yes there's romance between Haden and Daphne, but it's not insta-love. It's a relationship that's brewing all throughout the novel as the two spend time together and get to know each other. Haden isn't a brooding, mysterious lead. Instead he's somewhat awkward as he's trying to navigate a human world he doesn't understand. He's from the Underrealm and his lessons about humans are dated at times so his language and manners are a bit stiff as he tries to figure out how to communicate with Daphne. I found this aspect of Haden actually charming and funny at times. Sometimes his mannerisms reminded me of a cross between Sheldon Cooper and Data from Star Trek which is kind of an odd statement about a romantic lead I know but I found it endearing.

Daphne is a strong character who is independent-and not about to be swept off her feet by a mysterious stranger. Daphne and Haden don't have a "meet cute" moment. In fact Haden messes up their first meeting pretty badly and ends up getting punched in the face-not your typical love at first sight moment which I appreciated. Daphne wants to make her own choices about her future and Haden wants her to as well instead of trying to control her or decide her future for her. And there's no love triangle-yay!!!

The cast of supporting characters is well rounded and not just stock sidekicks and best friends. They are all involved in the future of the Underrealm-even if they don't realize it. Both Daphne and Haden have characters around them but they are all woven into the story together. The story is mainly about Daphne and Haden but there are rich subplots with Daphne's new friend Tobin determined to find his missing sister and Daphne's estranged father wanting to make up for lost time. I really enjoyed the layered plot and how all the stories and characters tied together. I felt it made the novel have more of a mystery feel than just romance. There are lots of twists and while some things were a bit predictable, I was still pleasantly surprised by others.

This is the first in a series and while there are still many unanswered questions at the end, I didn't feel as though I was led hanging. The book had a good conclusion that left me satisfied while still eager for more. A great start to a new series perfect for fans of mythology.