April 01, 2015
Over Spring Break, we had a full week of programming ranging from storytime to a Lego-Build-Along. Since Ms. A was hosting a Cinderella programming for the tweens the week after Spring Break, I wanted to make sure I had something fairy tale themed for the younger kids who might have wanted to attend the tween program but couldn't because they were too young. I've also been wanting to do a big fairy tale party for a long time, so I thought this would be perfect timing.

I hosted the Fairy Tale Bash on Friday night at 7pm. It was a busy day and the weather was rainy and yucky, so combined with the theme, I thought I'd get a large turnout. Surprisingly, I only ended up with six kids, so I ended up not using the songs I had planned because they were content to read all the books-yay! But even with the low turnout, we still had a blast and I have plenty of stuff to recycle for next time!

I sadly didn't remember to take many pictures until the room was getting taken down. I only have a few to share-sorry!

Here's what I did:

For books, I pulled a variety and since I had a small group, I let the kids choose which books they wanted to read. I used fractured tales and retellings since I wanted something the kids most likely hadn't read before, they entertain the parents as well, and they're fun! I actually had more books than I needed, but the kids picked everything but The Sunflower Sword to read, so having a small crowd meant for more reading time!

I had planned on singing The Grand Old Duke of York and using the Five Knights in Shining Armor rhyme from Storytime Katie (without the flannel board, because I am not the flannel queen like Katie!) and the song Curtsy Like a Princess from Storytime Katie,  but I ended up forgetting about these when we ended up having an extended storytime and conversation about fairy tales!

After the books, I let the kids loose at all the stations I had planned (which again, was plenty and way more than I really needed!) 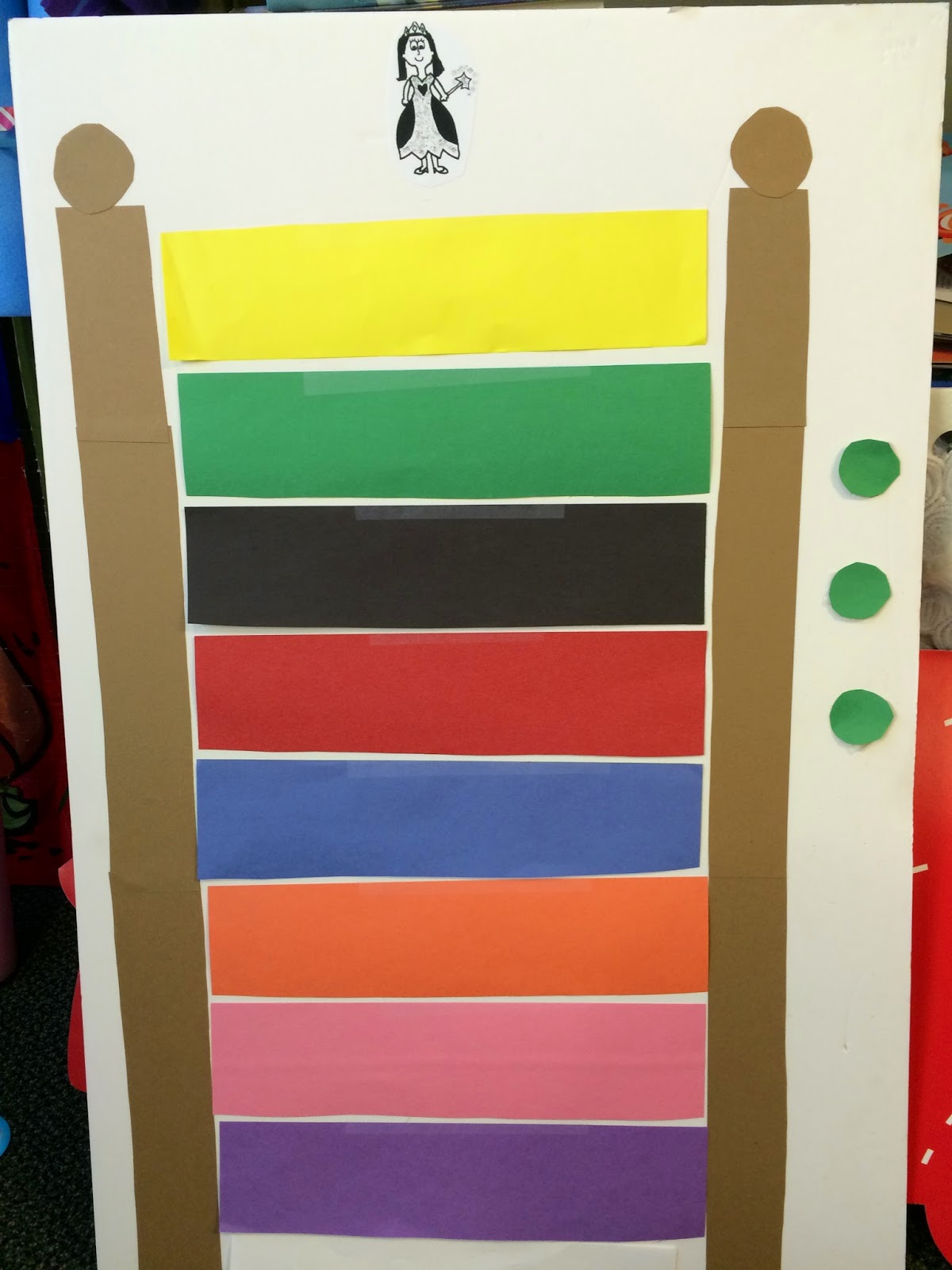 -Princess and the Pea-I had the kids hide the pea under a mattress and then try and guess where it was hiding. They had lots of fun hiding the pea from their parents!

-Jack and the Beanstalk Counting Game-I made beanstalks out of paper plates and paper towel tubes. I added a paper castle and some cotton balls on the plates to create a castle in the sky. I got the idea from several things I found on Pintrest, but modeled my beantalks after the ones on Fantastic Fun and Learning. I then put out bowls of beans and some dice and had the kids roll the dice, then place that number of beans on the plate. They quickly learned to set the beans on the plates gently and ended up balancing a bunch of beans on the beanstalk (I think the highest count was around 80!) They had a blast with this one and it was easy to make.

-Three Little Pigs House Building-I used cotton balls as the straw, Popsicle sticks as the sticks, and legos as the bricks. The kids built houses and then tried to blow them down and see which one was the strongest. Another very popular activity!

-Goldilocks and the Three Bears Opposites-I created a chart in Word and printed it out for the kids. It had six boxes and each box contained a word-hot, cold, big, small, hard, soft. I put out various magazines and had the kids find items in the magazines that matched the words to fill in their opposite charts. I also put out crayons in case they wanted to draw their own items in, but I think everyone took the magazine route-cutting and gluing was too much fun.

-Fairy Tale Maps-Since I wasn't sure what age I'd end up with, I wanted something that was easy for the younger kids but that could be more detailed for the older kids. I provided paper and crayons and invited the kids to draw a map of a fairy tale world. They drew maps of how to get through the forest to granny's house and how to help Goldilocks out of the bear's house. It wasn't very popular with the young crowd I had.

-Fairy Tale Matching Game-I printed of pictures of various items and the names of fairy tales and fairy tale characters. I then cut them out and scrambled them up. The kids had to match things like Jack to the Beanstalk, Goldilocks to Porridge, Cinderella to the Glass Slipper, Hansel and Gretel to Candy, Snow White to an Apple, Sleeping Beauty to a Spinning Wheel, Rapunzel to a Tower, Little Red Riding Hood to a Basket. The kids knew most of the matches but they did get stumped on a few. The parents commented on how much they loved this activity because it asked the kids to remember details from the stories and it gave them a chance to talk about the fairy tales and recap the stories with their kids.

-Photo Ops-We have some large painted cardboard face cutouts that we've had forever. One is Little Red Riding Hood, one is Rapunzel, one is Humpty Dumpty and one is Yoda. I used everything except Yoda, although I did debate bringing Yoda out just for fun! Humpty Dumpty is a nursery rhyme, but since I only had princess-types, I wanted something else. I also was lucky enough to borrow these awesome My Little Pony foam noodle horses from another branch: 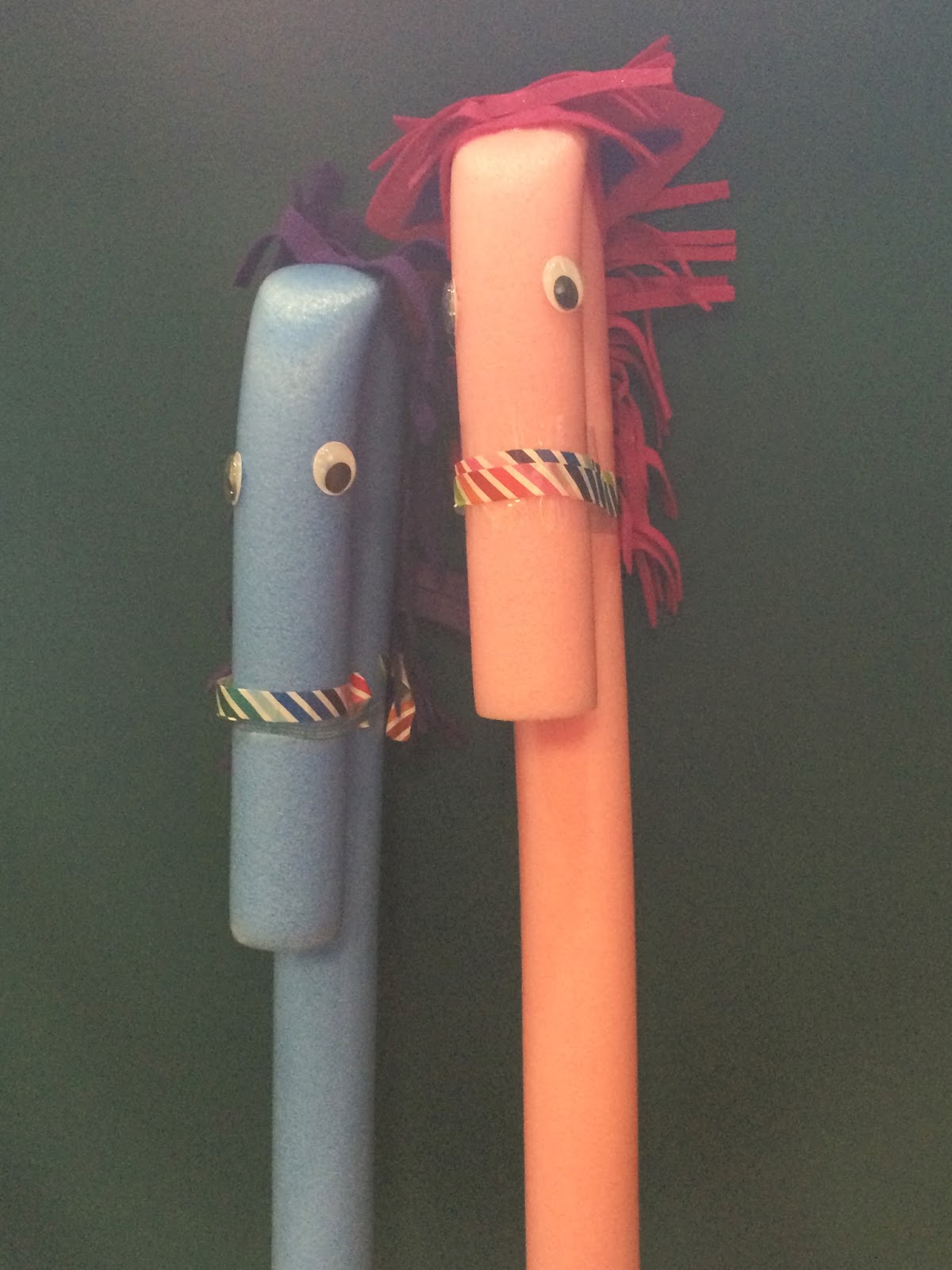 I used these in the photo op section as well. The best part was when the kids started posing the ponies into the face cutouts and the ponies became Rapunzel! I thought about using the ponies with some sort of jousting something, but I had so much already, I opted not to do that.

At each station I included some basic instructions for each activity as well as some talking points for parents. I saw the parents actually read the suggestions for what to talk about at each station and then talk to the kids, so I think it went over pretty well.

I also had a huge book display of various fairy tale books and many of the books checked out.

The program was open for grades pre-K-grade 5, but I had mostly pre-K-Kindergarten.

What I learned:  I will for sure repeat this program because it was so much fun, the activities were easy to put together, and the kids loved it. They stuck around until 8:30 playing with everything and making sure they visited every station. I would change the time though and make it a bit earlier. I think 7 was just too late and the following week we hosted another evening program at 6:30 which had a much larger turnout. I avoided using any specific theme other than fairy tales, but I think catchy names and characters are an initial draw, so maybe I would add something to appeal to that (although I really wanted to not focus on anything Disney!) I would also like to come up with a big dance or movement activity to go along with the fairy tale theme and I would encourage the kids to come in costume as well. Overall it was a lot of fun and I can't wait to do it again!