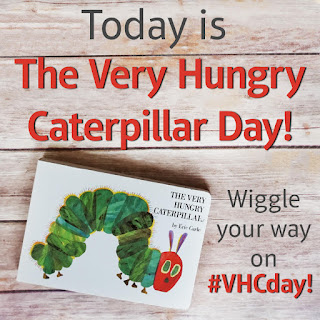 I can't say enough good things about the beloved book by Eric Carle. I loved it as a child, I loved it again as a librarian, and I love it even more as a parent.

I'm not sure where the sock puppet idea came from originally at my library as it was made before I started there, but you can see an example of one at Busy Crafting Mama who shared one for Flannel Friday a few years ago. The idea of the storytelling puppet is that you wear the caterpillar sock on your arm and add the various foods as you tell the story and move the food up your arm and then end with a beautiful butterfly!

It doesn't matter what age group I use the caterpillar puppet with-it always has the same effect. The kids, and often the parents, are just in awe of the magic of storytelling and there's an excitement in the room after the caterpillar transforms into a butterfly. It's one of my most favorite moments as a librarian and it happens every time I tell this story or read this book-it never gets old.

I also learned to love The Very Hungry Caterpillar even more as a parent. It was one of the first books BabyGreenBean learned to "read" and his stuffed toy caterpillar was a constant companion during his first year. He had the stuffed caterpillar before he read the book and one day, when he was about one, I brought the book home from the library to read to him. I pulled it out of my bag and his eyes lit up with recognition-it was caterpillar! It was such a great moment as a librarian mama! Now he knows the story well enough he "reads" the book and re-tells the story himself with his Very Hungry Caterpillar lacing cards. He loves Eric Carle's books and loves finding caterpillar hidden in The World of Eric Carle logo as well as sorting all his Eric Carle books together because he recognizes the illustrations. Seeing him love the book makes me fall in love with it even more.

In honor of The Very Hungry Caterpillar Day, Penguin Young Readers has a giveaway! 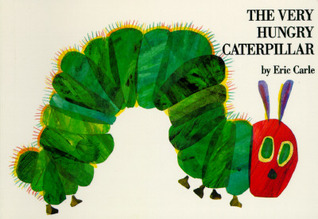 Enter for a chance to win one (1) of five (5) copies of The Very Hungry Caterpillar by Eric Carle (ARV: $21.99 each).
NO PURCHASE NECESSARY. Enter between 12:00 AM Eastern Time on March 20, 2017 and 12:00 AM on March 27, 2017.  Open to residents of the fifty United States and the District of Columbia who are 13 and older. Winners will be selected at random on or about March 29, 2017. Odds of winning depend on number of eligible entries received. Void where prohibited or restricted by law.