March 17, 2017
Well, I finally have time to sit down and type up all my thoughts about LibraryCon Year 2, or as I lovingly called it, Revenge of the Con!!!

LibraryCon 2015 was such a huge success we knew we had to repeat it.  (You can check my posts about our first year here: Part One, Part Two, Part Three)

Yet even with that success (400+ in attendance, great feedback from attendees and participants), we realized after the fact that we forgot all about marketing and promoting the Library itself. We figured people would walk into the Library, but with nothing to draw them there and with the entire event being held in our main concourse and meeting rooms, no one actually entered the Library. So the first item up on our planning agenda was to figure out how to promote ourselves.

The first suggestion was for us to have a table ourselves. We collected various swag from conferences (with multiple staff attending ALA Annual, we were able to talk to comic publishers there and pick up lots of posters, bookmarks, and other giveaways.) We also contacted various publishers for promo items and we received some amazing stuff! In addition to all the giveaways at our Library table, we wanted lots of items to promote the Library and all of our upcoming programs as well as various services we provide that we thought would appeal to our crowd. Dobby served as our table mascot: 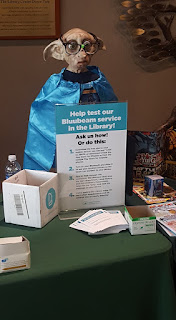 We also helped our gift shop set up a sidewalk sale of geeky items like buttons, mugs, bags, stickers, etc. Our gift shop is right next to our front entrance so it got tons of traffic and was another way to promote the Library-and give money back to the Library since the shop is run by our Friends group.

Since attendees failed to enter the Library last year and we didn't want to crowd everyone into the concourse, we decided to bring some of the guests and vendors out into the Library. We created an "author's alley" just outside of the teen area which brought people into the Library. It also helped promote our science fiction, fantasy, horror and comic areas both in teen and adult since the tables were set up near the stacks. We also used the story hour room as an all day tabletop gaming room, which was a huge hit and busy all day long! And we moved things like the illustrator draw-along and Geeky Storytime  into an area outside of the children's department so it was more centrally located in the Library.

In year one, we weren't sure what the response would be like and planned long breaks between each panel-and we only had three panels. We heard from attendees they wanted more and we realized we didn't need to worry about breaks, attendees would plan their own. So we added more panels and more consecutive things happening to hopefully help with crowd control. Giving attendees more options of things to do at one time helped with people not getting bored or restless with the con.

I am always trying to promote librarians as experts and try to promote that we excel at reader's advisory. Since this is a group of people who were likely readers and who were interested in genre fiction, I recruited a group of co-workers and some of my staff members to kickoff our panels with a panel presented by librarians. We titled our session "What Geeks Should Read Next: What's New in Fantasy, Science Fiction, Horror and Comics"

The staff that participated are all pretty geeky readers themselves, so it was lots of fun putting together a list and really hard to limit ourselves to just four-five titles to talk about! We also had a great mix of age range among the panelists as well as what we read, so we were able to cover multiple genres and age ranges from middle grade, young adult, and adult. I asked all the panelists to focus on titles that had either been released in the last six months of were upcoming in the Fall 2016 or Winter 2017. We also gave away lots of book swag at this panel. It was a great way to promote the Library and our staff as experts in what to read next. We heard from many attendees that this was their favorite panel of the con-yes!

As far as promoting the event, we had fliers with a full agenda and a Facebook event page made in addition to our regular promotion in our programming guide, newspaper listings, and Library website and Facebook. The Facebook page was the best promotion we got as our guests and vendors could share it with friends and fans and post teasers about what they were bringing-several artists did this! It was also a great way for us to answer questions people had about the event (Was it free? Yes. Open to all ages? Yes. Registration? No. Family friendly cosplay welcome? Yes.) We also posted about giveaways and other tidbits to get people excited leading up to the event.

More to come on how all our planning took shape and what year 2 turned out like!