My Favorite Books That Didn't Grow Up

July 27, 2009
My weekend reading (and ranting) of The Vampire Diaries got me thinking about children's and YA books. I think there are some books that are still great reads when you read them again as adults (Anne of Green Gables, A Wrinkle in Time, The Giver-for me) but there are other books that don't grow up with you. You may have loved them as a teen, but if you were to go back and re-read them, you would probably think "why did I ever like this and read it?" (And yes, please forgive the terrible lack of great YA books during my teen years. Why do you think I love reading YA now?)

nted, I don't think all books are meant to stand the test of time. I think there are lots of books that written just to encourage and develop a love of reading, but not really meant to be read again as an adult. My husband and I got to talking about childhood favorites that didn't age well for us, and here were some of our favorites that are better left in our younger years. (Co-blogged with my husband Andy)
And of course, please chime in with the books that didn't grow up for you.


The Babysitters Club by Ann M. Martin
Sarah: For those of you that read these-did you too want to start your own BSC? Yeah, why I loved these (and the super specials and the mysteries and everything else) I have no idea. But I devoured them in my mid-late elementary school years. We still have them at my library, but they never check out. Now I wonder why I ever wanted to start a club and why these girls seemed cool. There are a couple of blogs that re-visit this series which are pretty fun to read. BSC Headquarters, Babysitters Club Revisited

Matt Christopher Books
Andy: These wonderful children's books that played upon the hopes and dreams of all young athletes were a staple of my childhood. When my friends and I weren't reading them, we were trying to write our own stories. But that was only until we realized that every story was the story of an athlete who had one problem on the field-and another off the field-that while seemingly unrelated, had a single solution that somehow solved both.

Sunfire Romances
Sarah: I really don't remember much about these other than the covers and how there were tons of them in the teen section in my library. I read some of them, but mostly I liked looking for them to buy at the used book sales-for some reason I thought I would someday read them all and wanted to buy the ones I came across. Each one featured a girl in some historical setting who had to pick between two boys. I picked Elizabeth as my sample cover because the hair is what makes the cover. Here's a list of all the Sunfire books-you so want to go read them now don't you?

Sweet Valley High by Francine Pascal
OK, I have to admit, I read the Sweet Valley Twins a lot more over the SVH. This was anot

her series I got hooked on and devoured. I even watched the TV show. I have to say I was always more of an Elizabeth fan over Jessica, but I was always eager to read about the Wakefield twins, super specials, spin-offs and all. You know these are going to be bad when in the author's bio her other works mentioned have been turned into after school specials. On a funny side note, according to the Wikipedia entry on Sweet Valley High, the series was criticized for it's unrealistic portrayal of teens and outrageous plots. The first two examples? "The twins battling a werewolf in London" and "Jessica falling in love with a vampire" And yes, there's a snarky SVH blog too.

Redwall Series by Brian Jacques
Andy: Another classic from my childhood, it's not hard to understand why this series does not hold the allure it used to. First of all, it's about a bunch of talking rodents. And with all due respect to Disney, at this point in my life, small furry talking animals just don't do it for me anymore. Secondly, large passages of the book were devoted to the description of British food, which by most accounts is disgusting. And finally, aside from these minor annoyances, the fact that every story has the same plot takes away from the mystery and wonder that this series originally held for me. 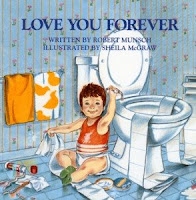 Love You Forever
-This never was a favorite, but we both agree it doesn't grow up well!
Andy: Perhaps the creepiest children's book ever written-and that includes Alice in Wonderland.
Sarah: Yes, that poor guy-I don't think he ever got married.
Andy: No, he has children.
Sarah: No, I think he stole them. Besides, we never see them, so how do we know they're really there??
Andy: Creepy because the grown up child-
who now with children of his own, who were very possibly stolen-sneaks into his mother's bedroom into the dead of night to cuddle.
Sarah: No man can be normal after reading this one.
Andy: I think Edward (Cullen) might have read this one as a child.
Your turn-what book didn't grow up?