March 15, 2010
I was reading through my google reader over the weekend when I came across Alea's In My Mailbox post. She got a crazy amount of books this week including a ton of romance novels since she's been on a romance kick. (I'm so proud!) I scrolled through her book list and I came across this: 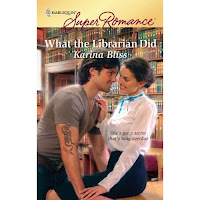 The plot of the book says: (From Amazon)-Is Rachel Robinson the only one on campus who doesn't know who Devin Freedman is? No big deal except that the bad-boy rock star gets a kick out of Rachel's refusal to worship at his feet. And that seems to have provoked his undivided attention. Devin, the guy who gave new meaning to the phrase "sex, drugs and rock 'n' roll." Devin, the guy who somehow becomes wedged between her and the past she's kept hidden for years.

It's up to this librarian to find out firsthand just how "bad" he really is. Because her secret—and her growing feelings for a man who claims he's bent on redemption—depend on his turning out to be as good as he seems. Which is really, really good.

I have to admit I'm amused and annoyed at the same time. I'm amused at the idea of a librarian romance novel, but I'm annoyed because of the stereotype on the cover. This book is being published March 16, 2010, yet the librarian on the cover has a terrible outfit that looks like a business woman meets Little House on the Prairie. And she has a bun in her hair-seriously?? I have to say I'm surprised they didn't top it off with glasses on the tip of her nose.

The book got me thinking about librarian's in fiction. There are good representations of librarians and there are bad. I'm a nerd and I get excited when I'm reading a book and the characters go to the library or talk to a librarian. But what bugs me is when contemporary novels fail to acknowledge changes in library's and librarians-especially in YA novels.

I may be biased, but I think YA librarians are pretty cool librarians. Yes, I know there are still librarians who fit the sterotype-there probably always will be, but there are a lot of us who don't-especially in the YA world. We encourage teens to have fun in the library, attend programs, and talk in the library. I never "shush" my teens! So I get annoyed when I read a YA novel where the librarian is giving evil eyes to teens and telling them to "shush!" Is that really how the YA authors I'm trying to promote to my teens and fight so hard for see my profession?

"...It opened with the heroine and librarian, Rachel Robinson, tending the university library. If she’s a stereotypical librarian, I wouldn’t know. I’m not even sure what the librarian stereotypes are. But if funny, smart mouthed, kind, with a love for vintage clothes are typical librarians, I need to hang out with them more."

Her comments about the book give me hope and I feel like Ms. Bliss has done a good job of not falling into the librarian sterotype trap-although her cover sadly does. I hope that other authors take note and start to write about fun cool librarians too.

So, do you have a favorite fictional librarian-good or bad?