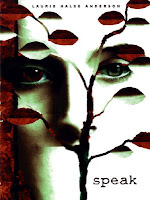 So have you heard the news about #SpeakLoudly? A friend of mine is a teacher at Republic High School and she's the one that told me about this banning a week ago. Now it's blown up and it's all over the place. This is happening in the area where I live. Republic is a fifteen minute drive from my house and they are part of the county that my library system serves. I am embarrassed for my community and I'm taking a stand.
Missouri State University Professor Wesley Scroggins is throwing a fit over various subjects and books being taught in the Republic Missouri school system. He has a 29-page document he presented to the Republic School Board and wrote an opinion piece in the local newspaper. You can bet I'm fired up!! This all comes about a week after a banning of Sherman Alexie's The Absolutely True Diary of a Part Time Indian in a town about two hours away from Republic. (As a side note, I love this opinion piece on the Stockton banning from one Stockton's residents)
So I know I'm not adding many new thoughts to this discussion, but I wanted to add another post to the blogosphere and take a stand.

-Banning books is wrong. If you don't want your children to read it, fine don't read it. I have no problem with that. But what I do have a problem with is when you tell an entire student body not to read a book. And I have an even bigger problem with the fact that Mr. Scroggins, while living in Republic, doesn't even have his own children attend the public school but instead homeschools them. So they're not even reading this book in school!

-If you find a rape scene to be "soft porn" then I think there is something very sick and wrong with you, Mr. Scroggins.
-Obviously, Mr. Scroggins, you read these books looking for the dirty flilthy bad parts. If you would have read them without a highlighter you might have noticed that Speak is about standing up for yourself. A girl is raped and she feels like she can't tell anyone about it-I know many teenage girls who feel that way about various things. So instead of having teens read a book that shows that there is help and they can take a stand, we'll let them suffer in silence? If you had read Twenty Boy Summer,you would know that's a novel about moving on after the death of a loved one and handling grief. Let's never show students that making rash decisions based in grief over your brother's death are bad. Apparently, teaching students that getting drunk and make rash decisions can turn out bad (as Frankie does) is not something we want to teach students. I guess we'd rather them learn that one on their own.
-I also have a problem with the fact that Mr. Scroggins picked out Twenty Boy Summer to be included in his banned book complaint because it was a "spotlighted read" on the Republic High School Library website. This was just a random find and something additional to add to his complaint. There is no real complaint here. If you don't want to read it, don't read it. This book is not required reading and if you're going to start attacking random YA books, well, you're going to have to shut down the entire library than because you never know what sort of scandal may enter a teens mind just by stepping foot in the library and pulling a book of the shelf.
-And the biggest thing I'm upset with is the fact that Mr. Scroggins calls out the school board saying these things should not be in the school because board members are Christians. He is using his own Christian based agenda and his 29-page statement to the school board is furthering that agenda. This is one of the reasons why I sometimes have problems telling people that I'm a Christian-I don't want to be associated with these wackos. Because as a Christian, I think faith and relationship with God is what is important and not banning books. Freedom of speech allows you to talk about your religion and your ideas, but guess what? It also gives writers the freedom to write what they want to write and students the freedom read what they want to read. Again, if you don't want your children to read these books, fine, that's your right and I will respect that. But don't tell everyone else they can't read them-because not everyone agrees with you, even fellow Christians.
-You know what I love though? Now an entire community is going to read these books. As this grows, you can bet the library hold lists are growing (and we're ordering more copies!) People will be buying these books at the local bookstores. I'm happy that the comments on the News-Leader article support the freedom to read and are anti-censorship. It makes me happy that my community is coming together and taking a stand and reading these books.
So Speak Loudly and read these books. Write a comment on the News-Leader article. Write a letter to the school board. Blog about it, Twitter about it, and share your support for this authors and stake a stand against banned books.