November 09, 2010
Tween Tuesday is a weekly meme hosted here at GreenBeanTeenQueen to highlight great reads for tween readers! Join the fun and add your Tween Tuesday post below. 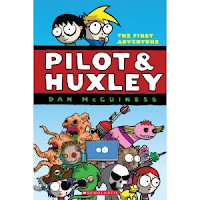 About the Book: Pilot and Huxley are best friends who are about to get pulled into the biggest adventure. The video game they rented, Alien vs. Terminator vs Predator vs Robocop vs Jim Carry
is overdue-and just happens to hold the password to activate an alien race's weapon of doom. The aliens send the Grim Reaper to collect the game, but he just sends Pilot and Huxley to a strange new world. Now they have to find the leader, find a way home-and oh yeah, find a way to defeat evil aliens.

GreenBeanTeenQueen Says: When you work with tween readers you can never have enough gross out humor and Pilot & Huxley offers up a new comic series with plenty of gross out humor.

The banter between Pilot and Huxley is tween perfect-exactly how tween boys talk! One boy is the calm logical one and the other thinks their entire adventure is so cool so they bicker back and forth at times which adds to the humor. The story is so out there and crazy but tweens won't mind-they'll be laughing along. There's evil aliens, a lost pirate, a grim reaper, shape-shifting girls, giants, laser beams, robots, sloberfinks-everything you could ever want in a comic, it's packed in here.

It has plenty of silly and gross-out moments-my favorite is when the boys are sent on a quest to retrieve a golden nose hair from a sleeping giant and have to trek through snot in order to complete the quest.

The comic is a fast read and reads somewhat like a cartoon you'd see on Cartoon Network, so I think this would be perfect to place into the hands of a reluctant reader. The jokes are smart, the dialogue is witty, and there's plenty of adventure. This one is perfect for tweens. Check out the sneak peek of Pilot & Huxley and be sure to add this to your tween comic order!

Book Pairings: This could pair nicely with the Kit Feeny comics by Michael Townsend (the silly humor will appeal to readers)

Full Disclosure: Reviewed from ARC sent by publisher for review