April 05, 2011
Tween Tuesday is a weekly meme hosted here at GreenBeanTeenQueen to highlight great reads for tweens. Join the fun and add your link below. 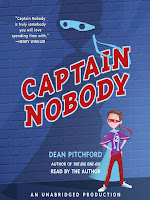 About the Book: Newt Newman is overlooked at school and lives in the shadow of his big brother Chris, the football star. At the big game, Chris is knocked into a coma. To keep his mind of his brother, Newt's friends encourage him to find his "inner other" for their Halloween costumes. Newt throws something together and discovers Captain Nobody, defender of the little guy. Soon Captain Nobody is saving the day. Can he also save his brother?

GreenBeanTeenQueen Says: Captain Nobody is on the 2011-2012 Mark Twain list (our state reading list) and I think readers will love having a funny book on the list!

When I first picked this book up, I thought it was more a silly superhero story. At first I was a bit confused how the storylines worked together. I don't know if they really flowed together all that well, but it works and I think kids will love the humor.

While Newt is a great character and I liked Captain Nobody, for me the supporting characters were my favorites. JJ and Cecil are hilarious! Maybe they just stood out to me more because I listened to the book on audio and the voices the author uses to bring these characters to life is so much fun. JJ is obsessed with fantasy, she's an avid reader, and she's very smart. She also is very strict about grammar and the fact that signs are written incorrectly really bugs her. I loved Cecil. He's the motivator and very excitable. He's like an exuberant preacher always shouting about the next big thing.

Newt's story is a bit far fetched and his adventures too easily solved, but Captain Nobody is still a fun read. It's great for readers looking for adventure and humor.