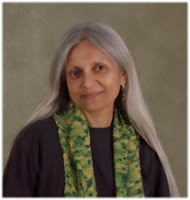 Please welcome Uma Krishnaswami, author of The Grand Plan to Fix Everything! I love hearing about libraries, especially libraries around the world-I hope you do too!

In Praise of Two Libraries, Forty Years and Half a World Apart

Libraries were not a part of my early childhood. I grew up in several cities in various parts of India and public libraries were not as central to communities are they are in the US. We had a lending library in one of the neighborhoods we lived in, where you paid a small fee for each book you borrowed. It dealt mostly in comic books, which I borrowed from time to time despite the fact that my parents disapproved of them heartily. I had a small collection of children's books that I just read over and over. When I got tired of them my parents were quite willing to buy me more. They didn't buy me everything I ever asked for, but they never said no to books.

I was 15 when a library became a part of my life. We had moved to the mountain state of Himachal Pradeah, to a town called Simla. Its name has now been changed to a more accurate Indian spelling--Shimla--but back then the Anglicized names from the British Raj were still around. After getting settled into temporary housing, my mother and I set out to see the town. It was winter and there was snow on the ground--a thrilling novelty to me, coming from India's hot plains to this hill town. At one end of a wide open space known as The Ridge stood a confection of a building, all beams and peaked roof, next to a neo-Gothic church. The mock Tudor building was a library.

"Let's go in and see what they have," my mother said. We did, and I was hooked! In the next few months, I read all of Jane Austen's novels. They had the lot, all on one shelf, musty and beautiful with flimsy, crackling pages. I read Sir Arthur Conan Doyle and Mark Twain and Dickens. I read the Victorian poets, who all sounded vaguely familiar and somewhat alike--until I came to Yeats, and sensed the magic of shaping language to have an emotional effect. I read Tagore's Gitanjali with a foreword by that very same Yeats, and began to get a faint glimpse of the fellowship among writers.

The librarian was an elderly man who was delighted by my enthusiasm. He was used to local retirees coming in to read the newspapers and magazines, with an occasional student or recreational reader wanting to check books out. You could only take out two at a time, so I walked a lot to the library and back, and every time I came in he'd have suggestions for me. I don't remember his name (maybe I never knew it in the first place) but I owe him a great debt.

Today the Internet informs me that the Tudorbethan building is home to the State Library of Himachal Pradesh. I'm happy to hear that it's still a library. I wonder if they still have a Jane Austen collection.

Fast forward forty years to the public library I use the most: Farmington Public Library in San Juan County, New Mexico. Without this library, I literally could not live in this relatively remote place and do what I do. It is my lifeline to the world of books. I use it constantly. I'm grateful for it. I marvel at it. It is an astonishing place staffed by people who love and know books, and who are committed to connecting patrons with the material and information they need. The Youth Services people are special heroes in this department. They reach out to a huge service area. They run a teen room. They brought graphic novels into the collection when the form was still being seen by many as a passing fad. I could happily lose myself anywhere in this place, but the children's section is a particular delight.

Sometimes it saddens me that there are places where people are hungry for books and learning and don't have access to them. Then I hear about projects like Ethiopia Reads and Room to Read and Boi Gari. And I know there's hope.

Here's to libraries, past and present, and the dedicated people who staff them, support them, and make them possible.

Uma also created a video of her library in Farmington and I'm so glad she did! It's so fun to see other libraries and I hope to visit the Farmington library someday. Be sure to check out the storyhour room doors-they're amazing!! 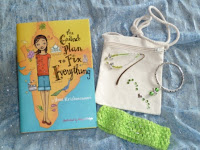 A Grand Giveaway! Three lucky Grand Prize winners will each receive one copy of THE GRAND PLAN TO FIX EVERYTHING along with a starry assortment of bangles and trinkets that Dolly Singh, famous famous Bollywood movie star, would adore! An additional 3 runners-up will receive a copy of THE GRAND PLAN TO FIX EVERYTHING. To enter, send an e-mail to GrandPlanGiveaway@gmail.com. In the body of the e-mail, include your name, mailing address, and e-mail address (if you're under 13, submit a parent's name and e-mail address). One entry per person and prizes will only be shipped to US or Canadian addresses. Entries must be received by midnight (PDT) on 6/30/11. Winners will be selected in a random drawing on 7/1/11 and notified via email.