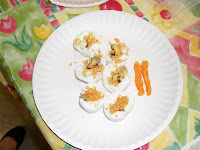 I love Iron Chef, so of course I had to make into a library program! I've done this program twice-once it was a bit iffy and the second time was fantastic. I think it works best with a smaller crowd-I've done it with a crowd of seven and a crowd of over 30 and I had better results with the smaller group.

The basic idea is that I set out a ton of "ingredients" and the teens break up into teams (or by themselves if the group is small) and make three "dishes". The first time I did Teen Iron Chef we did "After School Snacks" and the second time around was "Desserts". (My pictures are from the dessert Iron Chef).

Some teens will try to make something edible, others will go for the gross out factor. I've used judges to sample the food, but I really didn't love the idea of subjecting someone to the gross snacks the second time around, so I asked a co-worker to judge on creativity and she awarded all the teens an award (most colorful, I would actually eat that, lives up to it's name, etc). It's a fun program and it's always amazing to see what the teens come up with! So how did I run this program?

First, I purchased supplies. Tablecloths are a must and make for easy cleanup. I used our Storyhour room which has a tile floor to make sure I could clean the floor if there were any major messes.

I've learned it's best to set out the supplies on one table and have the groups come ask for what they want instead of trying to deal things out equally. 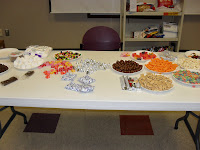 For desserts, I purchased raisinets, marshmallows, brownies, starburst, jelly beans, fruit snacks, Hershey Kisses, Whoppers, gummy fruit slices, Fruit Roll Ups, animal crackers, Cheetos, Fruit Loops, kettle corn. I also had some sprinkles from a past program that I put out on the supply table. I laid everything out on the table and gave the teens plates, napkins and silverware. I also asked the teens to make three dessert dishes-one using brownies, one using Fruit Loops, and one using jelly beans. I've used Jello and pudding in the past but wouldn't recommend unless you know you're going to have a small crowd. That was messier than it was worth and I was picking up Jello all over the place! Marshmallows are a good, easy and less messy way of sticking things together.

After washing hands-(make sure they wash their hands! The first time I ran an Iron Chef program I had a room full of teens and noticed several licking their fingers and then touching food again-another reason why I'd be careful having any taste testers!!) the teens were off creating food. I didn't allow any actual cooking so it was more assembling and creating.

The best part is seeing what everyone comes up with! 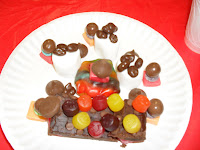 -This one we decided was a Fairy Land or maybe the witch's house from Hansel and Gretel. 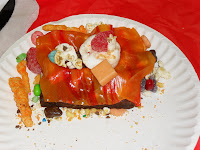 -A creation entitled "Unicorn Vomit"-and yes, the teen chef did eat it!! 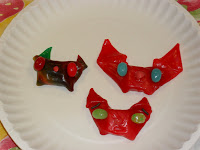 -We weren't sure if these looked like something from Star Wars or a Chihuahua, but I love the bottom one with eyebrows! 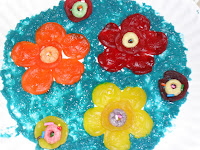 -My favorite entry, flowers made from smashed Starburst. The blue is crushed up Fruit Loops!

Anything with food is always a hit with my teens and we had a great time talking about the crazy desserts we could create. They also thought it was hilarious I was loading them up on sugar on a Friday night and then sending them home-hey, that's the best part of being a librarian, isn't it?:)