Please welcome Nova Ren Suma to GreenBeanTeenQueen! Nova is visiting blogs and spilling secrets about her new book, Imaginary Girls and I've got secret #3! Check out Nova's Twitter for all her tour stops! Be sure to enter for your chance to win a signed copy of the book!! 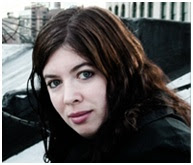 I’m here spilling secrets about my book Imaginary Girls. As the cover says, “Secrets never stay below the surface.” I guess not, because here’s another one bubbling up now…

I know everything about Ruby and Chloe, the two sisters in Imaginary Girls. I created them, I built them up from nothing, and I know what they’d say, what they’d think, and what they want for breakfast. But there’s one thing about them I’ll admit to you I don’t know, something I never decided. Their last names.

All I know is that Ruby and Chloe have different fathers—they’d slap you if you called them half-sisters, so don’t do it; they’re sisters, wholly and completely—but because of who their fathers are, they don’t share the same last name. For a long time, I kept cycling through last names for them, giving one to Chloe, another to Ruby, taking both back and changing them up, until finally I realized that their full names didn’t need to be in this story for them to be full characters. I guess their true last names are the one secret they kept from me, even after all the time we spent together.

Now I admitted that, I have one more secret to reveal about my characters’ names in Imaginary Girls. Sometimes I’ll borrow a name from somewhere I shouldn’t, with the intention of changing it later. That’s what happened with London. She got her name because while I was writing a draft of this novel I was also nursing a serious reality-TV addiction. America’s Next Top Model was on… And one of the girls on that particular season was named London… And you guessed it. I liked the way it sounded for my London, so I used the name as a place holder. Unfortunately, when the time came to change it, I couldn’t do it. London Hayes was London Hayes, and she refused to be called anything else. I guess this is one of the dangers of using temporary names while writing, and also one of the great risks of watching too much television.

Interested? Check out this sample of Imaginary Girls and then enter for your chance to win!
-One winner will receive a signed copy of the book
-US Address only
-Contest ends June 28 midnight, central time
-One entry per person