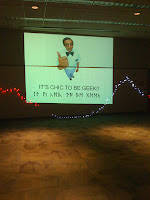 Last year my teen library council came up with a program idea called The Moonlight Masquerade Ball. It was tons of fun and I wanted to repeat something similar this year, but I also wanted something with a broader appeal, since the Ball was very girl heavy (meaning only one boy showed up!)

This year I hosted Geek Prom. Held in May (just like the Ball) on a Friday night, Geek Prom was our big Spring/welcome Summer Reading bash. Geek Prom had a better turn out (around 40 teens showed up) and while it was still girl heavy, I had around 10 guys this time.

I made a geeky playlist on playlist.com and had that playing through the auditorium computer and speakers. The playlist included songs like the Doctor Who theme, Time Warp, The Mysterious Ticking Noise by The Potter Puppet Pals, White and Nerdy by Weird Al, Buddy Holly by Weezer and other random geeky songs and theme songs. I also mixed in popular songs and lots of Lady Gaga since the teens love dancing to anything Gaga!

I decorated our auditorium with Christmas lights strung around the room. We also have two sets of lights, so I turned off the main lights and turned on the track lighting so it felt more like a dance. I put up a screen saver (see photo above) since we had the projector turned on to see the playlist.

Since it was prom, I had a punchbowl and I bought sugar cookies and frosting to give the teens a craft/snack. For stations I put out chess and checkers at various tables and I made a big poster of Harry Potter to play "pin the scar on Harry" (we did the same thing for the Ball). I had a table with tape and construction paper so they could make their own scars to use. This worked great since I didn't have to pre-cut anything and it gave them a craft to work on if they weren't dancing. I also made a "Name That Geek" quiz that I hung up around the room. I had photos of various geeky characters or celebrities (The cast of The Big Bang Theory, Chuck from Chuck, The Mythbusters, etc) on papers around the room and asked the teens to name each photo.

The most popular station was the duct tape table. Wal-Mart had a great selection of crafty, funky duct tape (they usually do around April/May because of the duct tape prom dress contest). I bought two rolls of the regular tape and then some neon colors, tie-dye and zebra tape. I had a pattern for duct tape wallets and provided pipe cleaner stems to make duct tape roses. I also suggested the teens could make duct tape pocket protectors.

The teens danced and crafted for about an hour and a half and then we held a prize drawing. I had books, book bags and a small stuffed dragon I had won in a contest and re-gifted for teen prizes. The geekier the prize the better!

Everyone came dressed up in some sort of geeky outfit. Either they dressed as a geek (this was most popular) or they dressed in a fandom outfit. I had Doctor Who, Hogwarts students, Duct Tape Man (he had duct tape all over his shirt that spelled "I Can Fix It") and a zombie. The teens had a blast walking out into the library and getting strange looks from the adults since they were in knee-highs, suspenders and geek glasses.

The best part of the night was seeing the teens get excited about the event. They danced to various songs and sang along. Doctor Who, a normally quiet teen, jumped up and yelled "THANK YOU" when the Doctor Who theme came on and ran across the room in geek glory. The teens asked for a slow song (Taylor Swift of course) so they could dance with their friends. Me, thinking they would actually couple dance, turned one on and instead they all acted too shy and danced with their friends in groups next to their crushes. Two teens who had dressed up in Harry Potter gear danced together and I overheard them saying "you like Harry Potter? Me too" "That's so cool!" (Sweet, geeky, library romance!)

It was a lot of work, but totally worth it! Now I'm thinking about a good theme for next year's bash!!