May 17, 2012
In committee news, committee reading is kicking my butt! And I can't share what I've read, which makes it hard to post. I'm going to be posting a lot more audiobook reviews though! :)

Flash reviews are short reviews of lots of titles. I have an audiobook addiction which means I have a lot of audiobooks to review! I don't read a lot of adult titles, but I sneak some in sometimes, so here's what I've listened to recently:

The Waverley family has always been eccentric. Their garden has rumored prophetic fruit that will show you the greatest moment of your life. Claire avoids the fruit trees, but uses her family's mystical garden and her talent in the kitchen to create a catering company. When Claire's estranged sister Sydney returns home after escaping their small town years ago, Claire's carefully constructed life comes crashing down. And a new neighbor who has shown an interest in Claire and won't take no for an answer, and Claire finds herself having to deal with the pain of the past so she can enjoy her future.

I was recommended this book because I enjoy Cecelia Ahern's novels and I like a bit of magical realism in my fiction. Garden Spells is a good story and I really enjoyed the characters of Sydney and Claire. There's also a nice touch of romance which I liked. I really loved the character of cousin Evanelle-she's such a fun, eccentric old lady and she was a wonderful supporting character. The story is a bit predictable but it was fun and a nice fluffy read-or listen. I liked this audiobook enough to give Sarah Addison Allen's other books a try.

The Language of Flowers by Vanessa Diffenbaugh

Victoria has been in and out of the foster care system. Now she's 18, she's aged out, a﻿nd she's on her own. Victoria tries to make it on her own and makes a few friends along the way, including a flower shop owner who gives Victoria a job. Victoria discovers a skill for flowers, but life gets in the way and she's afraid her past will be repeated.

I don't want to say more without spoilers because there's a bit of a twist halfway throughout the book. Unfortunately, that's also where the book lost me. I had a hard time feeling bad for Victoria. She had people around trying to help, but she keeps pushing them away. Victoria also had a foster mother, Elizabeth, who wanted to adopt her. But Elizabeth becomes selfish and lets her own selfishness and problems with her sister get in the way of taking care of Victoria. There were just so many characters that I ended up really disliking, which made me end up disliking the book as a whole. 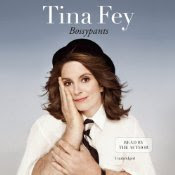 Mr. GreenBeanSexyMan and I were carpooling to work and I missed my audiobook time, so I decided to track down one we would both enjoy. Since we're fans of 30 Rock, I thought we would both like this audiobook. Plus, it's narrated by Tina Fey which made it even better.

I'm not a big fan of memoirs, but Bossypants I liked. (So did Mr. GreenBeanSexyMan). We laughed throughout the audiobook and it was a very fun listen. I think I liked it so much because it's not just a straight "this is the story of my life" memoir, but it's more vignettes and random thoughts from Tina Fey's life. Listening to her narrated it made it seem like a friend was telling you a bunch of funny stories and I liked her narration a lot.

Full Disclosure: I am an Audible Affiliate. Purchasing audiobooks from links will earn me a commission to  use for prizing and giveaways for the blog.