\
\
One of the joys of working at the library is that I get to work with lots of wonderful people who geek out about the same things I do! One of my coworkers (C.) is a huge Tolkien fanatic, so she organized a giant series of programs called Tolkien Fest.
\
The library district hosted programs kicking off with Bilbo's birthday in September, book discussions and a Tolkien Scholar talk in October and November and culminating in watching all three Lord of the Rings movies on the library's big screen in December.

To help celebrate, I hosted a birthday party for Bilbo Baggins on World Hobbit Day (September 22, which is also Bilbo and Frodo's birthday). It was a huge program with lots of activities-we hosted it in our auditorium with various stations set up around the room. In the end, over 100 people attended the event! Here's what I did:

Station 1: -Name Tags (with your name written in dwarven runes)
I used the nametags and dwarven runes from Houghton Mifflin's Hobbit Day Event Kit. I was very lucky to have C. come up with Hobbit first names (male and female) as well as last names. We separated them into different baskets, labeled them and then had people pull their names as they came in.

Station 2:Trivia
I used a mix of trivia questions. C. made a very tricky quiz for fans and I made a simple trivia sheet for the youngest of patrons-easy questions like "what is the wizards name?" and "where does Bilbo live?" I also printed off the trivia quiz from Houghton Mifflin included in their Hobbit Day Event Kit.

Station 3: Word Search
I had another event kit from a Hobbit Second Breakfast site that appears to no longer have the event kit up. There was a word search included that I put out at station two. There are others available online that could work.

Station 4: Edible Hobbit House
This one didn't work exactly the way I had planned, but still worked. I bought graham crackers, white frosting (dyed green), vanilla wafers, pretzels, and goldfish. I didn't have time to make a sample beforehand, but I was picturing the graham cracker as a base, laid flat, covered in frosting, with a vanilla wafer as a round door, pretzels to make trees, and fish in a pond. Basically using the graham cracker as a canvas for the rest of the picture. Instead, it turned into gingerbread house style hobbit homes. It still worked, but was much messier. Thank goodness for tablecloths!

Station 5: Write Your Own Limericks and Haikus
I put out paper (long paper that looked like a scroll) as well as simple instructions explaining what limericks and haikus were. Since Hobbits love riddles, this was a fun way to incorporate that-and the kids were very creative! 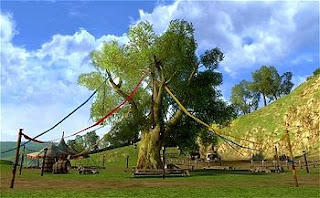 Ok, this one is a bit of a stretch, but I really wanted to make this craft! I got the idea in a library workshop, but you can find the instructions laid out on a blog post by Teaching the Little People (thanks Pinterest!) I am so no crafty and I can make this one!

You take a round shower curtain ring and plastic tablecloths (I used pink, green, and white-I thought they seemed Hobbitish). Cut the tablecloths into strips, tie them around the shower curtain, and you have instant simple streamers that are lots of fun!

Station 7: Make Your Own Hobbit Feet
I did see an idea about gluing string to your feet, but ewww! We went much simpler. I provided string (I pre-cut mine, but you don't have to), crayons, and paper. I gave the kids instructions to trace their foot, then cut the foot out, make it Hobbit foot hairy and then tie it over their shoes. I was thinking they could tie them around the ankles but some patrons got really creative lacing their new feet into their shoes!

Station 8: Make Your Own Birthday Fireworks
An easy craft that required a lot of prep work because I needed tons of hole punch dots in various colors. My wonderful volunteer punched out a bowl full of dots and we still could have used more. I provided black paper and glue sticks and the kids glued away to make the dots look like fireworks. (Another station that I was especially thankful for tablecloths!)

Station 9: Pin the Ring on Bilbo
Our wonderful community relations department printed me a giant poster of Bilbo to use for this game. I used the rings from the Houghton Mifflin Hobbit Day Event Kit. We played this game about halfway through the program to break things up. I invited anyone who wanted to play to join us and the kids had lots of fun, even if they could feel where the poster was attached to the wall. :)

Station 10: Bean Bag Toss and Hula Hooping
All the other stations were set up around the room, with Pin the Ring on Bilbo and the lawn games in the middle. And what Hobbit birthday party would be complete without games? This also provided another activity for the kids who wanted to be very active and sped through everything else.

Station 11: Middle Earth's Most Wanted
My coworker C. is pretty amazing. She created a huge wanted poster for the party by printing off the movie stills of each of the dwarves, Bilbo and Gandalf and titled it "Middle Earth's Most Wanted." I hung it up on one of the room walls (It was so large it took up the entire wall!) with an instruction sheet that asked if they could name each character. I also provided a list of character names. (Hint: they were all in alphabetical order!) The teens that attended loved this and I overheard them arguing over who actually had the characters correct and if they matched the descriptions in the books.

Station 12: Hobbit Hunt
I printed off seven pictures of Hobbits (all seven pictures were the same). I asked one of my employees to hide them around the library so even I didn't know where they were. She did a fantastic job hiding them secretly, but not so secretly they couldn't be found. You just had to look a bit to see them. She put one in each department (children's, YA, circulation, reference and local history) as well as hid one in the reading room window and the other above the Fantasy shelves in fiction. This was an activity we left up all day and it was a good way to manage the crowd in the program as we had people going back and forth. Parents and kids alike kept asking where all the Hobbits were-and they were tricky to find and stumped many people. They all asked us to do another scavenger hunt and said they loved this part of the program.


And of course, it was a birthday party, so we had to have cake!

So there you have it! My very extensive and fun Hobbit Day Celebration.

It was a blast and everyone loved it. We had some patrons come in costume, others in Lord of the Rings t-shirts. This was a program I advertised for all ages and I truly had all ages. I had everyone from babies to seniors (with lots of tweens, teens and college students in between-and you know how elusive they can be when it comes to library programs!) Overall it was a fantastic program and I would happily repeat it.