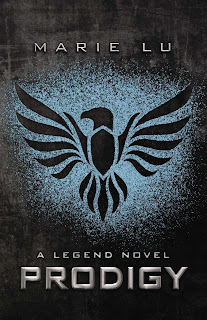 I am very excited to be part of the Prodigy Blog Tour! I have an excerpt of the book and author Marie Lu's thoughts just for GreenBeanTeenQueen readers!


PRODIGY Excerpt: Stretching out before us, peeking through the gaps between the military buildings, is a city: tall, shining skyscrapers reaching up through the low clouds and delicate snow, and each building illuminated by beautiful blue lights that pour from almost every window and every floor. Fighter jets line the skyscrapers’ rooftops. The entire landscape is aglow. – Day, page 282

Marie’s thoughts: It wasn’t a huge stretch for me to envision the world of Prodigy and Legend as our own world, and that in itself is a little disturbing. Everything dystopian in the books was pulled directly from reality: the Republic is not a far cry from North Korea’s regime, for example, and the plagues in Legend were inspired directly by the eugenics movement back in the early 20th century. When I first started writing Legend, in fact, it was late 2009 and we’d already started seeing our country split off into extreme, twisted versions of our political parties. That extremism was part of what inspired Legend’s world, and now it’s a little eerie to hear all these calls for secession after our most recent election. After all, the Republic and the Colonies are the broken remnants of a once great United States. Let’s hope that doesn’t happen in real life.


About Prodigy: June and Day arrive in Vegas just as the unthinkable happens: the Elector Primo dies, and his son Anden takes his place. With the Republic edging closer to chaos, the two join a group of Patriot rebels eager to help Day rescue his brother and offer passage to the Colonies. They have only one request—June and Day must assassinate the new Elector.
It’s their chance to change the nation, to give voice to a people silenced for too long.
But as June realizes this Elector is nothing like his father, she’s haunted by the choice ahead. What if Anden is a new beginning? What if revolution must be more than loss and vengeance, anger and blood—what if the Patriots are wrong?
In this highly-anticipated sequel, Lu delivers a breathtaking thriller with high stakes and cinematic action.

Read Marie’s e-special, LIFE BEFORE LEGEND: STORIES OF THE CRIMINAL AND THE PRODIGY for only $2.99!Kindle Nook