Opening Song: Where is Thumbkin? by The Wiggles 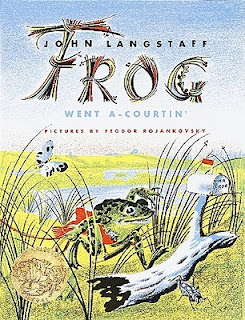 -Before I read this book I talked about how there are some songs that tell silly stories that are very old songs and have been passed down to kids over the years. I also told the kids that going courtin meant that Froggy was looking for a wife and he wanted to get married. I asked if they had ever seen a frog marry a mouse and they all giggled and said "NO!!" I told them that we would have to look at each the pictures to see what happens and if they did get married and what happened at the wedding. This helped keep them really engaged in the book and they liked it a lot more than I thought they would. They kept pointing out the various animals in the story and asking "are they going to get married?" They had lots of fun with this one.

Song: These Are My Glasses by Laurie Berkner 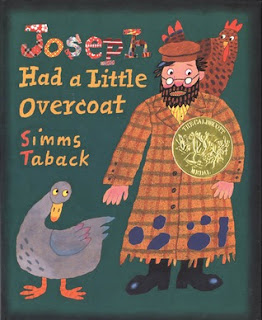 Jospeh Had a Little Overcoat by Sims Taback

-I love this book and the kids loved it too. I told the kids this book had secret cut outs in the pages. The picture would look whole but when you turned the page, you could see where part of it had been cut out so you could see colors from the next page. They got VERY excited about this and I learned my lesson about secret cut outs! They got so excited that they wanted to come up front and and point out all the secret cut outs on each page! Having 20 kids all point out cut outs on each page was hilarious and we made it through the book OK, but next time, maybe I'll mention the cut outs at the end. :)

Song: Shake Your Sillies Out by The Wiggles-because after the secret cut outs we needed to get our wiggles out! 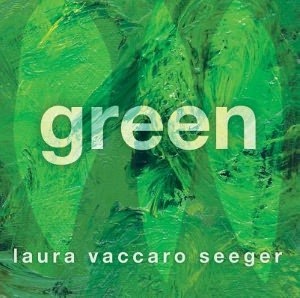 -I told the kids that Green won a Caldecott honor this year and that it was all about one color-could they guess what it was? They shouted out "Green!" They loved the illustrations and the secret cut outs. Again they got very excited and had to point out all the cut outs on the pages and during our activity time I put both Green and Joseph Had A Little Overcoat out for the kids to look at again and several of them sat and paged through the books looking at the pictures-they were big hits!

Song: Do the Butterfly by Greg and Steve-this one worked great since it was a fun action song and it was to the tune of Frog Went a Courtin

-Joseph Had A Little Overcoat cut and tell story-I found this template on the ALSC blog via Pinterest and had the kids color the pages and put the story in order so they could retell the story at home.

-Getting Dressed boards-we have a set of getting dressed boards with zippers, buttons, and snaps that I put out to go along with Joseph

How it Went: The kids loved it! All the books were big hits and they especially loved discovering the secret cut outs in the pages. I had lots of kids want to read the books again and they had lots of fun with the songs and crafts this week as well.