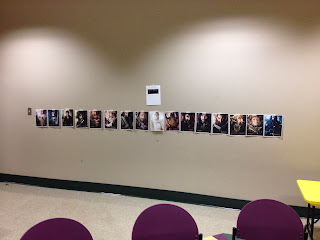 Can you name all of The Hobbit characters?


I am a big geek and one of the things that I love about working in the library is that I get to work with people who share my love for geeky pop culture-both staff and patrons. I've been wanting to do a geeky storytime for awhile and finally hosted one a couple of weeks ago. Here's what I did:

To help set the mood, I had the kids walk into Hedwig’s Theme

Opening Song: Clap Your Hands by They Might Be Giants Book: Star Wars ABC-I had the kids help out and call out the characters they knew when they came across them. They knew most of them and I had quite a few Star Wars fans in the group which made this book fun.

Song: Soft Kitty-when I announced this song, I got a big laugh from the parents in the room Rhyme: Star Trek Ok, not really a rhyme but I wanted something fun to add, so I had the kids help recite this while we practiced making the Vulcan salute.

"Space... The final frontier... These are the voyages of the Starship Enterprise. Its continuing mission: To explore strange new worlds... To seek out new life; new civilisations... To boldly go where no one has gone before!" Parachute: Firefly Theme Song-I printed off two picture of Serenity and attached them to a popsicle stick to give it some weight so it would fly. I told the kids we were going to help the ship fly in the parachute and we bounced the ship around in the parachute while the theme song played.

-Make your own Dalek Craft-I used paper cups, dot stampers (which ended up being pretty messy), colored pom-poms, craft sticks and cotton swabs. The kids could decorate the cup and poke the craft stick and cotton swab in the cup to make it look like a Dalek. This one was messy but fun!

-Character Matching-I printed off photos of characters with their signature item (Kirk and the Enterprise, Han Solo and Millennium Falcon, the Doctor and the TARDIS, etc) and the kids had to match the characters with what they belonged to.

-Robot Shapes-To go along with Robot, Zombie, Frankenstein, I provided the kids with scraps of paper, markers, scissors and glue and had them create their own robots using various shapes.

-Superhero Mask Making-I used our diecut of a mask and gave the kids markers and string to create a superhero mask.

-Eraser Wookies-I got this idea from Art2D2's Guide to Folding and Drawing. Using a marker you make lines on an eraser, then stamp them onto paper. The lines look like fur and you can add a face and armor to your wookie.

-Name the characters in The Hobbit-I recycled this one from my Hobbit Day Celebration. I printed off the cast photos of all the dwarves, Gandalf and Bilbo and hung them in a row and had the kids and parents try to name each character. I did put them in alphabetical order to make it easier for everyone.

How it Went: I had a pretty good turnout for an evening storytime (I think I ended up with 18 kids and 12 adults). The crowd enjoyed the storytime and had lots of fun, but there weren't many truly geeky parents there as I had hoped. I didn't think I had picked obscure fandoms, but no one really seemed to know much about any of the fandoms except Star Wars (I did have one parent recognize Firefly). The kids were mostly excited about Star Wars. Even though they didn't know all the fandoms, they had a blast making the crafts and the mask making was the most popular station followed by the robots and the daleks. I felt like most of my crowd wasn't there specifically for the storytime but just happened to be in the library so attended because they were there. (We don't do registration for our storytimes and they are open to anyone, so I pulled in a big crowd from who was in the department.) I know at least one boy came just for the Star Wars book and activities which he was thrilled about!

I would love to repeat it and I think there are so many other fandoms to include and so much more you could do! I would like to figure out how to attract a more geeky appreciative audience, so I'm thinking of tying it in with another program we host or advertising it at the comic book and game store.

I had a blast and loved sharing all the geeky fandoms with the kids!