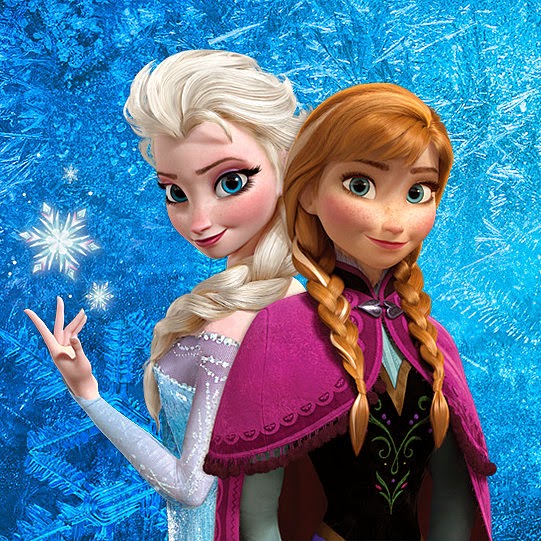 If you work with kids, you know what a phenomenon Frozen has become. So when I realized that I would be without a summer reading performer during the last week of our Summer Reading Program, I knew I had to plan something. Every Thursday at 1:00, we have a big performance (usually a hired performer but sometimes in house programs as well) and I knew that once our patrons got into the habit of coming to the library every Thursday during the summer, I couldn't skip the last week of July.

I decided to go with a Frozen Sing-A-Long since the movie was thankfully covered in our movie licensing at the library. I didn't really have many ideas of what to do exactly except sing to the songs in the movie while it played. But luckily my amazing friend Angie also hosted a sing-a-long and gave me a lot of great ideas.

Since the program was planned after our programming booklet was published, we only advertised this event via fliers, word of mouth, and on the library website. I knew we'd have a good crowd but I wasn't sure how many to expect since it didn't utilize all our usual promotional methods. So I was shocked when I ended up with 150 kids and around 50 adults. Pretty good for a program planned and not heavily promoted! It didn't hurt that everyone who picked up a flier said "oh my kid will love this!" and then told their friends.

I set up the room with a lot of floor space and some chairs out for the adults, which were quickly taken up. Part of the problem was that I didn't get to the room fast enough and a crowd of anxious people had already let themselves into room before I was ready and finished setting up! So the crowd management ended up not being as smooth as I would have liked. I ended up having to run around to catch everyone who came in (and ended up coming in both sets of doors since I couldn't close or lock one because I was trying to play catch up with people already there) to get them to fill out the prize drawing entry slips. My original plan was to have everyone enter through one door and fill the slip out on the way in, ensuring an entry for everyone and an easy head count method for me. Next time I know to close the set of doors I don't want them enter through and make sure staff are stationed by the doors to direct everyone inside. That's typically how the Thursday programs work anyway, but my overly anxious group sent this particular program into a bit of chaos.

My staff and I had made snowflake wands (diecut snowflakes on popsicle sticks) for the kids to wave around to each song-Angie's brilliant idea. We made 100 and one of my staff had to run back to the desk and make a bunch more to ensure every child had one. Between the crowd, the snowflake wands, and getting everyone entered into the drawing, the program actually started about fifteen minutes late.

Once I felt I had everyone mostly settled and asked if everyone had filled out an entry form for the prizes, I explained what we would be doing for the singing. I decided not to show the subtitles because I felt it would be too distracting and I didn't need them-the kids knew the songs. They were quoting along with the movie from the moment it started. I directed the kids during each song to sing along, but they didn't need my help. They knew all the words and motions and loved belting out the songs with other fans. I also made sure to applaud at the end of each song and tell our Frozen chorus how awesome they were-it was amazing to hear a room full of kids singing Let It Go at the top of their lungs!

The group did get restless since I had a lot of younger kids and younger siblings attend, and after Let It Go, there aren't as many songs as frequently. Because of this, I decided to hold an intermission. I asked the kids if they knew what an intermission was and explained it was a short break. I used this time to do our prize drawings (I bought Frozen pens from the Target dollar spot) and told the kids to not worry if they didn't get a prize-they would still get something at the end. Then we went back to watching the movie. This worked pretty well and was a nice way to break up the movie.

At the end of the movie, I passed out the goodies for everyone. I wanted everyone to go home with something, but I didn't want to spend time on a craft because I knew it would take forever and we'd never get to the movie. So with the help of staff, I passed out a paper doll packet using dolls from Paper Dolls by Cory. (Again, Angie's brilliant idea!) The kids liked having a craft to take home and it worked well because they could have fun and have a party at home without me having to facilitate a lot of cutting and folding.

Of course, no program is perfect and there were a few cons with this one. For one thing, the room was very crowded and with the adults pulling out every chair possible and bringing in huge strollers, the entryway often bottlenecked and it ended up very hard to maneuver around the room. Despite my best efforts to get the adults to be involved and sing with the kids and sit with them, many adults used this a babysitting time and sat in the back on their phones or reading a book and a few chatting with friends. I'm not sure what to do next time to encourage more involvement, but this is a recurring thing with our large summer reading performances.

Even with the downsides and crazy huge crowd, the feedback was great. So many patrons told me how much they enjoyed it, thought it was a great idea, and asked how often we do events like that. I don't know if another sing-a-long for any other movie would be as popular, but it was pretty simple to put together and it was a lot of fun. And there's nothing like hearing a room of kids singing their hearts out! I had so many of our library staff and patrons standing the hallway and peeking in to watch the kids sing Let It Go which was fantastic promotion for the youth services department!

Would I repeat it? Yes, but maybe with some more tweaks in how to handle the breaks between songs and a bit more crowd control. It was a pretty fun event and fairly easy to plan and implement. But do I want to listen to Let It Go anytime soon? Not really, I listened to it a lot to prepare for this event!