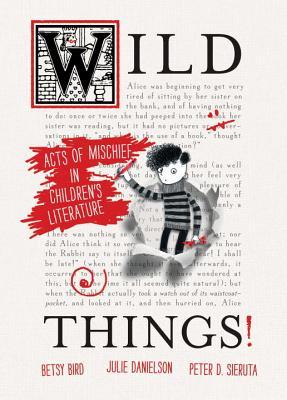 I knew from the first page of Wild Things: Acts of Mischief in Children's Literature that I was going to love this book. If you work in the world of children's and teen lit, you've most likely heard from others that they think children's lit is cute, sweet, and simple. But Betsy Bird, Julie Danielson, and Peter D. Sieruta are out to prove everyone wrong. They've uncovered some wild acts of mischief in children's literature and it's an absolute blast to join them on the ride. Want an example of some fun they discovered? Check out this crazy tidbit from Betsy and Jules:

I’ve been wracking my brain trying to remember how I first heard about this story.  Odds are SLJ reporter Rocco Staino is the one to credit.  You see, when Jules Danielson, Peter Sieruta, and I first started working on our book Wild Things: Acts of Mischief in Children’s Literature, we wanted to fill it to overflowing with some of the funniest, kookiest, craziest children’s book stories out there.  Everything from Robert McCloskey’s drunk ducklings to the true fate of Misty of Chincoteague.  And as we were writing the book we kept our eyes peeled for any new items that might fit the bill.  Well lo and behold in 2011 the article Paula Fox on a Roll came out.  On the surface it was a fairly innocuous piece about how the Newbery Award winning author was being inducted into the New York State Writers Hall of Fame.  Ho hum.  Nothing much to catch the eye . . . until you get to the part near the bottom where Ms. Fox has this to say about, of all people, the singer Courtney Love.  Quote: “She is crazy, and to use a modern term, a psychopath.”  And why, precisely, would Ms. Fox weigh in on the woman who coined the phrase “Kinderwhore”?  Because it’s her own granddaughter.

There’s nothing better than discovering that two seemingly unrelated beings, famous in their own right, have a connection.  In the course of writing this book we had to ultimately cut out stories that talked about how Roald Dahl claimed that Beatrix Potter yelled at him as a child.  We eschewed mentioning that the great Arthur Ransome, author of the British-beloved novel Swallows and Amazons, married Trotsky’s daughter.  But you WILL find stories about how Roald Dahl got to know Congresswoman Clare Booth Luce veeeeeeeery well.  And, you’ll follow our little research path to get to know how precisely a writer like Paula Fox becomes a grandmother to a Courtney Love.

Because to be perfectly honest with you, when it comes to the wide and wonderful world of children’s literature, nothing should surprise you.  There are some pretty wild people out there.

Check out more wild and unexpected stories from Wild Things on the Wild Things tour and follow Betsy and Jules around the blogosphere for more intriguing stories. And be sure to get your hands on a copy of Wild Things: Acts of Mischief in Children's Literature-you don't want to  miss out on these unexpected and surprising stories!