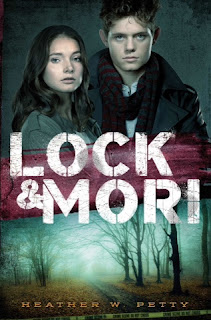 About the Book: (from Goodreads) In modern-day London, two brilliant high school students, one Sherlock Holmes and a Miss James "Mori" Moriarty, meet. A murder will bring them together. The truth very well might drive them apart.
Before they were mortal enemies, they were much more.FACT: Someone has been murdered in London's Regent's Park. The police have no leads.FACT: Miss James "Mori"Moriarty and Sherlock "Lock" Holmes should be hitting the books on a school night. Instead, they are out crashing a crime scene.FACT: Lock has challenged Mori to solve the case before he does. Challenge accepted.FACT: Despite agreeing to Lock's one rule--they must share every clue with each other--Mori is keeping secrets.OBSERVATION: Sometimes you can't trust the people closest to you with matters of the heart. And after this case, Mori may never trust Lock again.

Inspiration to Write Sherlock
I was rabbit-trailing through the internet, following links from other links into oblivion, when I came across this cool sounding article that was discussing how often heroes and villains in a nemesis relationship share character traits. And one of the observations by the writer was that it’s hard to judge that comparison for Sherlock Holmes and Moriarty, because we only get to view Moriarty as a character through Sherlock’s eyes. No one else even meets him in passing. I hadn’t noticed that when I’d read the Sherlock stories as a kid, so it opened up this giant gap in the story for me. Because what if Sherlock lied to Watson?

Those kinds of “What if?” questions almost always lead to way more and eventually become larger book ideas for me. I started to wonder what if Sherlock and Moriarty had way more of a past then Sherlock let on? What if they’d known each other high school? What if something that happened back then turned them into enemies?

I can’t really pinpoint when I decided to make Moriarty a girl. It was just part of the questions process. I had the idea in my head as Sherlock and Moriarty playing rivals, but probably best friends when it came right down to it—those kinds of friends who hurt each other over and over, but out of some twisted love place. And then I randomly thought that it might be more interesting if Moriarty were a girl. No one would ever expect a girl to be the center of a criminal ring like that. She could so easily hide among the men who serve her. All of that really opened up a whole world to me, of a female villain/anti-hero—one who uses her intelligence instead of her sexuality as a weapon, one who plays the “bad boy” in the relationship with “good girl” Sherlock, one who is vaguely sociopathic and gets away with it like her male counterparts have forever. I was so excited about the idea of that, I couldn’t stop thinking about it. I knew I had to write it.

The Research
This book was actually the first contemporary I’d ever written, which came with a lot more limitations than I thought it would. For example, London is not only a real city, but a really well-known and popular city. I was so used to being able to craft my own town that I found it intimidating to realize that I had to make sure this one was true to life. I had to get it right. But every time I started planning a research trip, some big family thing would happen making it impossible. So I dove into the research the way I would for any other detail in a story. I drew on everything I knew, read whatever I could get my hands on and watched anything I could find that was set in the city. I also was lucky enough to have friends who had lived in London offer to read the manuscript and help me fix anywhere that I’d misstepped.

Many of my friends were incredibly generous with their time and experiences for all the different elements in the book. They also listened to my whines and worries and let me talk through plot elements until I’m sure they were sick of hearing about it. Doing your book research is vital. But I think it’s equally important for a writer to be humble enough to recognize their lack of experience and to seek out help from those who have lived through it. Really, approaching all of your research with humility is the best way to make sure you’re really learning and not just twisting another person’s lived experience into your own existing parameters.

The Update
I’ve never really been interested in writing a book in a historical time period, so I knew right away that I would be modernizing the characters. Really, though, I feel like that was a much easier task than doing the historical research to get late-Victorian London right. The harder part of the book idea was crafting the characters. I needed to present these two icons as real-to-life London teenagers. I knew if I stayed true to their ages and made them more real, I’d be sacrificing the slick/unflappable/cool image that people even slightly familiar with the stories and adaptations have come to expect. But in the end, I was okay with that. I didn’t want them to be already who they become anyway. I wanted this to be their start, and for the series to track how and why they go from that to who we know them to be as adults.

The Inspiration to Write
I was always a huge reader, but I never thought about becoming a writer until my high school English teacher, Author Terri Farley (Phantom Stallion series) read an assignment I'd turned in and basically told me I needed to be writing. So, I joined the school paper. Then, in college, when I was kind of over the Journalism thing, I applied for a fiction writing class with Author and Professor Susan Palwick, who later taught me one-on-one. She really helped me find my niche as a kidlit writer.

I joined SCBWI shortly after I graduated, and my very first regional conference critique (of a really horrible middle grade book) was from Ellen Hopkins, whose debut novel CRANK was coming out later that year (2004). She was very patient with my rookie writer ways and encouraged me to keep going. But I got pregnant soon after that and floundered for a bit with my writing until Author Cynthia Cotten read one of my silly LiveJournal posts one night and told me I should be writing YA. She pointed me in the direction of authors like Melissa Marr, Charles de Lint, and Holly Black. I was especially taken by Holly Black's Tithe series, and started writing my own YA within days of reading VALIANT.