September 10, 2015
A month ago I wrote a post about how often I see parents looking at their phones instead of engaging with their kids at the library, especially in programs. The feedback I received from this post called me judgy, said there was no way I could know the whole story, and that most likely these kids were being engaged at home. It's true you can never know the whole story, but I still believe it's all about balance. 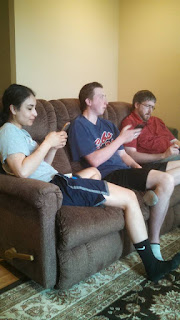 This photo is of a recent family get together. My son is just off to the right of this picture, playing with toys and hoping to catch the attention of his family. Instead, they're plugged in to their phones (and the ironic thing is my father-in-law captured this family moment on his phone!) It frustrates me on a regular basis when I'm with family and instead of engaging with each other, especially with my toddler, they are hooked to their phones. Alerts go off, an article must be read, a text must be sent-it happens all the time. My husband and I are trying very hard to put our phones up and leave them out of reach and ignore them until after my son goes to bed. Are we perfect? Not at all. But we're trying to make engagement a priority.

I know I'm not the only one concerned about this. There have been so many books published recently about families needing to unplug, screen addiction, and engaging as a family. The New York Times has published articles recently: "How to Cut Children's Screen Time? Say No To Yourself First." and "Screen Addiction Taking a Toll on Children." I'm not the only one noticing it.

Just look at this graph from Pew Internet Research about when people think it's OK to use their cellphones-it's a growing trend everywhere! (The entire article on mobile use is a fascinating read-be sure to check it out!) 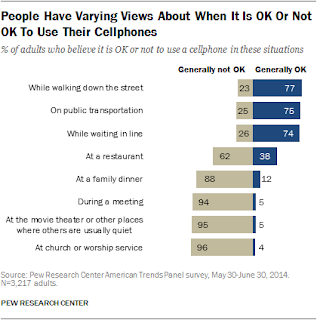 When we model that behavior of being plugged into technology, no matter where we are-home or the library, it shows our kids that technology is more important. Do we have to unplug completely forever? No. It's all about balance. So let me tell you another story.

I was at the library last week and I was roving the department, straightening books, cleaning up, and checking on patrons. We have a play area with early literacy toys and a really cool Eric Carle carpet and it's just off of the picture books, so it's perfect for families to hang out and engage. There was a young mom there with her nine-month-old son. She had actually brought a toy for him to play with (I'm not sure if she didn't know we had toys at the library, which is entirely possible, or if she just wanted to also bring something from home.) She had checked out an iPad from the library and was using it to type something up. As I was cleaning and straightening, I observed this mom. Even though she was plugged in to technology and would type on the iPad, she would pause every few minutes, look over at her son, talk to him, play with the toy with him and engage before she went back to her work. Later she and her son browsed through books together and she talked to him about what there was at the library and what books they were getting and she was fully focused on her child. She was using technology but she was also balancing it to engage with her son. That balance is so lost. Instead we end up making excuses as to why we need to be plugged in all the time.

A couple of days after that, I had a busy morning filled with lots of toddlers and their parents. And the entire morning made me smile because all morning long, I observed the parents talking to their kids, playing with toys, reading books, and talking to the other parents and making new friends. I overheard a dad singing with his daughter about putting the toys away and a mom showing her toddler and preschooler how to do the simple origami dog we had out as a passive activity. Watching the kids light up as they talked and played with the adults around them was awesome.

Yes, we need to use computers to get school work done. Yes, we need the library to be a place for our family to come and hang out. Yes we need to use the library computers to check email, take care of something for work, or just play and have fun. We never know the whole story and we never know what someone is going through. But it only takes a moment to pause, look up, and engage. Sing a song with your kids at storytime. Laugh at a book together. Watch their puppet shows. It's all about balance. I hope we can all get there together.