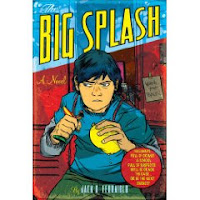 Rating: 5/5 Stars
Genre: Mystery
Release Date: 9/1/2008
About the Book: “The Frank” may seem like a typical middle school, but it’s actually run by Vinny Biggs and his gang. Need a stolen exam? Or want a sugar high? You’ll have to go through Vinny. Cross Vinny, and you’ll be facing one of his “hired assassins.”
Vinny’s “hired assassins” hold your social life fate in their hands. These assassins hide water guns, and with one quick shot you’ll look like you peed your pants, face social humiliation, and immediately are put in “the outs.”
Nikki Fingers used to be the fastest and most feared shooter at “The Frank,” but at the beginning of seventh grade decides for a fresh start. But when Nikki is taken out, seventh grade detective Matt Stevens is hired.
Could it have been her former boss, Vinny? The boy who had a crush on her? Or one of the many students at "The Frank" with a reason to hate Nikki? Matt only has a week to find out or he might find himself in “the outs” as well.
GreenBeanTeenQueen Says: Does anyone else remember the movie Bugsy Malone? It's had a young Jodi Foster and Scott Baio and a cast of other young teens in a gangster setting. This book reminded me a lot of that movie-kids in typically adult roles. That said, this book was very clever. It’s wonderfully written in a clever noir style that kept me laughing and guessing all night. It reads just like an old pulp detective novel and includes many of the characters you would expect to be there - the mob boss, the hired guns, the detective, the girl crush - only this time they’re in sixth and seventh grade.
There were so many things sprinkled in this story that made me smile. The kids who would do anything for a pixy stick rush, the frazzled newspaperman, and the kid-owned sandwich shop all added to the style, and I felt like I really was transported back into one of those old pulp detective novels.
The mystery had plenty of twists and turns and kept me guessing and second-guessing who did Nikki in. The dialogue is witty and snappy and is full of humor. Although the setting is middle school, readers who have gotten through their middle school years are sure to enjoy THE BIG SPLASH, as well.
Fans of great detective novels or gangster stories should add this one to their reading pile! I’m looking forward to reading more from Jack D. Ferraiolo - and hope that Matt Stevens is on another case soon!