February 21, 2012
Downton Abbey may be over for this season-check out my recap of the Christmas Special with Melanie!! 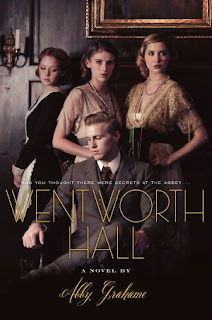 I think this was my most awesome find of the day! Wentworth Hall is a new YA book coming in May. Here's the description:

A lush, historical novel about the secretive Darlingtons of Wentworth Hall!

The prettiest people often have the ugliest secrets…

Eighteen-year-old Maggie Darlington has turned into an entirely different person. The once spirited teen is now passive and reserved. A change Lord and Lady Darlington can’t help but be grateful for.
It’s 1912, and the Darlingtons of Wentworth Hall have more than just the extensive grounds to maintain. As one of Britain’s most elite families, they need to keep up appearances that things are as they have always been…even as their carefully constructed façade rapidly comes undone.

Maggie has a secret. And she’s not the only one…the handsome groom Michael, the beautiful new French nanny Therese, the Darlingtons’ teenage houseguests Teddy and Jessica, and even Maggie’s younger sister Lila are all hiding something. Passion, betrayal, heartache, and whispered declarations of love take place under the Darlingtons’ massive roof. And one of these secrets has the power to ruin the Darlingtons forever.

When scandalous satires start appearing in the newspaper with details that closely mirror the lives of the Darlingtons, everyone is looking over their shoulder, worrying their scandal will be next. Because at Wentworth Hall, nothing stays secret for long.

The cover even has the tag line "And you thought there were secrets at the abbey..."

Anyone else thinking this could be Downton Abbey for YA? I'm excited by that idea and it got me thinking about other Downton Abbey-esque titles to recommend to YA readers. I think these would all be great for those mourning the end of Season 2. I'd love to hear any other suggestions you might have as well!

The Luxe Series by Anna Godbersen
A Countess Below Stairs by Eva Ibbotson
Darker Still by Leanna Renee Hieber
Wither by Lauren DeStefano (I know it's dystopian and in the future, but I thought it had a very Downton Abbey feel to it)
The American Heiress by Daisy Goodwin (Not YA but a great Downton Abbey read-alike)