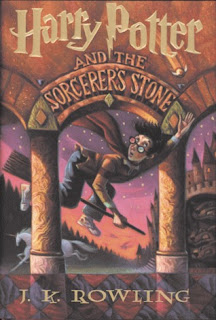 I had a favorite librarian moment last week. A young patron, about age 9, came into the library a few weeks ago looking for the Harry Potter series. He had just started reading them and was looking for Harry Potter and the Prisoner of Azkaban (my favorite in the series). Of course, this started us talking about the Harry Potter series, what characters we liked, what our favorite scenes were, and how much we enjoyed the series. He came in again last week looking for book four since he had just devoured book three. His mom said he had just started reading the books and was obsessed with the series. Then, after each book was read, the entire family was watching the movies. I told them about Pottermore and how they should check it out-I wish I would have had Pottermore the first time I read the series! It was one of those wonderful moments as a librarian where you get to share with a reader about your favorite books-it's what makes my job worth getting up for every day.

After my discussion with my new favorite patron, I realized that I haven't seen a single Harry Potter book on the shelf at my library in weeks-or make that months! I'd noticed a lot of younger patrons coming into the library and asking for the Harry Potter books and it got me thinking about how Harry Potter is now having a resurgence. ﻿

It's been five years since the last book came out, the movies are over, so why the sudden interest in Harry Potter? I'm sure the public opening of Pottermore and the fact that the books are now available as ebooks, didn't hurt Harry's popularity at all, but I'd been noticing patrons coming in asking for the books long before Pottermore went live. In fact, I looked up our circulation stats on Harry Potter and the Sorcerer's Stone, just to see if I was correct about the series being popular again. Our library system owns 12 copies of Harry Potter and the Sorcerer's Stone and the books have been checked out 54 times from January 1st. With books having a checkout of three weeks, and that averaging out to about a checkout per book, per month, no wonder I haven't seen any copies of the books around this year. A checkout per month might not seem like a lot, but that's all 12 copies being checked out every week this year so far. And the audiobooks 7 audiobooks we own have circulated 26 times so far this year. These are books that are getting read A LOT!

Whenever there was a new Harry Potter book or movie coming out, you couldn't find a copy on the shelf. But after the craze about the movie or the re-reads before the next book was released was over, the books came back and sat on the shelf. But that's changing. There are no more movies and no more books in the series to help generate the interest. This is a book that's been out for thirteen years.

So I'm wondering. Has anyone else noticed a resurgence in Harry Potter? Do you have young readers discovering the series for the first time? Are your copies of Harry Potter being checked out more than usual this year?