August 31, 2011
I've always enjoyed picture books, but taking on a job as a youth services manager where I now work with ages birth-18 means I get to read a lot more picture books! I've been reviewing them at work, but I decided it's time I started putting those reviews up on GreenBeanTeenQueen as well! Because you're never too old for picture books, right?:) 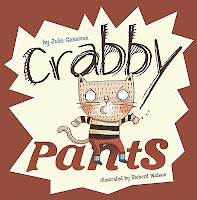 About the Book: A little kitten is very crabby and finds himself in the naughty chair. But then he thinks about his crabby pants problem and comes up with a way to solve it for good. Only his solution won't make anyone else very happy.

GreenBeanTeenQueen Says: I picked this one up on the title alone. I was called crabby pants many times as a kid (and OK, even as an adult sometimes) and the cover with the crabby kitten just made me laugh.

The story is as much for parents as it is for kids-both will get a kick out of the creative solution to the crabby pants problem. My only complaint was the ending, which was a little open ended, but still fun and could lead to a good discussion between parents and kids. Crabby Pants is a humorous picture book that's sure to lighten anyone's mood! 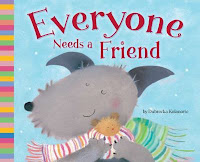 Everyone Needs a Friend by Dubravka Kolanovic

About the Book: Jack the wolf doesn't mind living alone, but he does get lonely at times. So when Walter the mouse comes for a visit, Jack is excited to have a friend to spend time with. But Walter has some annoying habits and Jack isn't sure he likes his company. Will Jack and Walter learn to get along?

GreenBeanTeenQueen Says: A sweet book on friendship, Jack and Walter are too cute! The illustrations have a nice, soft, warm & fuzzy look to them. Jack's annoyance at Walter's habits is funny to read about and I'm sure many readers can relate! A good book to add to a list of friendship books for the preschool crowd. 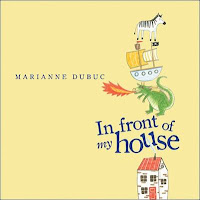 In Front of My House by Marianne Dubuc

About the Book: A child tells about what can be found in front of the house, inside the house, around the room, and beyond.

GreenBeanTeenQueen Says: This is a fun, twisty little book!

The book starts with "in front of my house" and soon grows to the bedroom, what's outside the window, what can be found in a book, in outerspace, and on and on. The path doesn't always make sense, but it captures a child's imagination perfectly (which doesn't always make sense either!:) It's a long picture book, but the text and illustrations are simple. It's fun to guess what could be coming next-chances are you won't be able to! The story is circular and we wind up where we started, making this a great book to read over and over again!