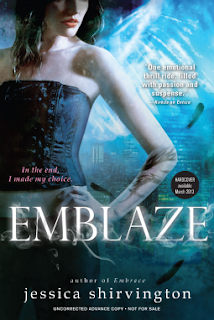 Violet Eden is back in the newest volume of the Embrace series! If you love angels and paranormal romance, you need to get your hands on this series! Violet is a great character and I can't help but ﻿like her and want to read more about her. And Lincoln-he's just awesome! With kickbutt characters and lots of action, you don't want to miss out on this series.
I have a special short story in honor of Emblaze-the book releases on March 19th so hopefully this will hold you over until the release date. :) I also have a chance to win a copy of Emblaze for one lucky reader thanks to Sourcebooks Fire.
CLAUDIA – FAMILY TIES BY JESSICA SHIRVINGTON