The ABC's of Kissing Boys by Tina Ferraro 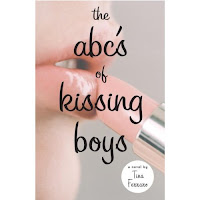 Rating: 3/5 Stars
Release Date: January 13, 2009
Genre: Contemporary/Romance/Girls in Sports
About the Book: Parker Stanhope's junior year is not starting out right. Everyone got moved up to Varsity soccer, except two players-one of which was Parker. Parker knows she should be on varsity-she's a good player, she's worked hard and all her friends are there. But now her friends are cutting her loose, she's stuck with a team of (gasp!) freshman, and her reputation is on the line.
Parker comes up with a crazy plan to get herself on varsity and back with her friends by pulling a stunt at the upcoming sports fair. She'll get a kiss at the kissing booth that will raise so much, the soccer team will have to make the most money and Coach Hartley will just have to put her on the team! But the kiss has to look real, and Parker doesn't have much experience in that department. Parker needs a kissing coach and the boy across the street seems to know a lot...
GreenBeanTeenQueen Says: This was a fun, quick, light read. It combines romance and sports and even a bit of mean girls. Parker is great character. I think because she's not a stereotypical jock or a typical girly girl, she'll appeal to a lot of readers.
Tristan is a great guy for Parker-he's smart, funny and confidant. I'm sure he'll be on many lit boy crush lists!:)
Parker does get a little annoying because she doesn't realize how mean her so called friends are, but I am a reader looking in, and Parker has to learn on her own. But that didn't mean there weren't times I wanted to yell at her for even thinking she needed them back!
As someone who dated a younger guy in high school and college and is marrying a guy who is younger and was a year behind in school, I loved how Parker was an older girl going after a younger guy. Now if only all guys could be as mature as Tristan is at 15!!
I think my favorite part of the book was the chapter headings that give various kissing tips. Props to Tina for coming up with a tip for every letter of the alphabet! Overall, this is a fun, simple, sweet story that's a great curl up and read the night away book. Tina Ferraro knows how to write a great romance for all ages and I look forward to what she has next!