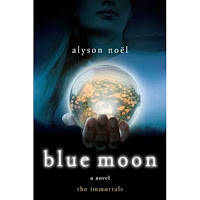 About the Book: (This is Book 2 in The Immortals Series, so there may be spoilers in the synopsis):
Eager to learn everything she can about her new abilities as an Immortal, Ever turns to her beloved Damen to show her the way. But just as her powers are increasing, Damen’s are waning.

In an attempt to save him, Ever travels to the magical dimension of Summerland, where she learns the secrets of Damen’s tortured past; a past which he has always kept hidden from her. But in her quest to cure Damen, Ever discovers an ancient text that details the workings of time. Now Ever must chose between turning back the past and saving her family from the accident that claimed their lives—or staying in the present and saving Damen, who grows sicker every day...

GreenBeanTeenQueen Says: I was super excited to read Evermore and I was thrilled when I got an ARC and was able to review it a few months before it came out. Bad part of that is now I've been waiting for what seems like forever for Blue Moon to be released! I am very much addicted to the world Alyson Noel has created in Evermore and am eagerly awaiting Damen and Ever's return-so of course, a happy dance was in order when I found out the release date has been moved up a month to July! 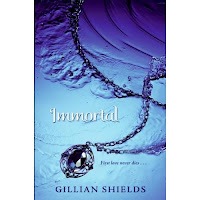 About the Book: Wyldcliffe Abbey School for Young Ladies, housed in a Gothic mansion on the bleak northern moors, is elite, expensive, and unwelcoming. When Evie Johnson is torn away from her home by the sea to become the newest scholarship student, she is more isolated than she could have dreamed. Strict teachers, snobbish students, and the oppressive atmosphere of Wyldcliffe leave Evie drowning in loneliness.

Evie's only lifeline is Sebastian, a rebellious, mocking, dangerously attractive young man she meets by chance. As Evie's feelings for Sebastian grow with each secret meeting, she starts to fear that he is hiding something about his past. And she is haunted by glimpses of a strange, ghostly girl—a girl who is so eerily like Evie, she could be a sister. Evie is slowly drawn into a tangled web of past and present that she cannot control. And as the extraordinary, elemental forces of Wyldcliffe rise up like the mighty sea, Evie is faced with an astounding truth about Sebastian, and her own incredible fate.

GreenBeanTeenQueen Says: I actually had not heard anything about this book until it popped up on Amazon under Blue Moon with the "customers also bought" display. It sounds like a dark gothic romance ghost story so I was excited to stumble upon this one. Plus in the author bio it says she taught at a school where there were rumors of a ghost of a young girl could be heard crying in the night. Just the perfect thing to make me want to add this to my ever growing wish list.