Geektastic: Stories From the Nerd Herd (I couldn't find any cover art!)

With illustrated interstitials from comic book artists Hope Larson and Bryan Lee O'Malley, Geektastic covers all things geeky, from Klingons and Jedi Knights to fan fiction, theater geeks, and cosplayers. Whether you're a former, current, or future geek, or if you just want to get in touch with your inner geek, Geektastic will help you get your geek on!

GreenBeanTeenQueen Says: I have been wanting this book since I heard about it a few months ago. I'm a geek, and reading stories about other geeks always makes me smile. Plus, there are so many geekdoms covered in this book, and so many awesome authors, I can't wait for this one to come out!:) 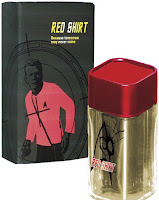 To go with the upcoming Star Trek movie which hits theaters May 8, 2009, Genki Wear is releasing three fragrances based on Star Trek. Is it really geeky of me that I kind of want one? I love Red Shirt, which has the tag line: "Because Tomorrow May Never Come" which totally makes me laugh! Everyone has fragrances now-first Twilight, now Star Trek-what's next?

To get you feeling geeky, here's a trailer for the upcoming Trek movie-anyone else recognize Kirk from Princess Diaries 2?