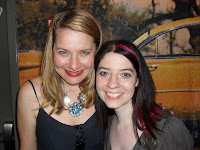 I was so thrilled when I got to meet Holly Cupala at ALA this year! She's a ton of fun and super sweet and now I have the chance to host her here at GreenBeanTeenQueen! This author interview is part of Holly's worldwide blog tour-check out the next stop Monday, July 26 at The Undercover Book Lover

Holly is hosting a contest as part of her tour, she check out Holly's blog and be sure to comment on the tour posts for entries!

Thank you for having me, Sarah! And can I just tell you, I love to say Green Bean Teen Queen? I’ve been looking forward to this forever.

What was your favorite book as a teen?

I spanned the continuum between SVH (oh yes, I pondered the ways of Elizabeth and Jessica with the best of them) and the classics. I had an unstoppable collection of teen romances. My parents must have thought they were pretty harmless…they were anything but! Mean girls, bad boys, monumental dilemmas…these things imprinted themselves on my consciousness for life. (In fact, I’d written two teen romances by the time I graduated from eighth grade, which my friends—and frenemies—read with rapt attention.)

I switched to a bigger school in 10th grade, and my perception of the universe cracked wide open. I always wanted to write, but who knew a person could write like F. Scott Fitzgerald? And who knew actual teen romance would be so incredibly painful…? Well, the characters in Catcher in the Rye and The Bell Jar did. So that might explain why Tell Me A Secret embraces the mundane and the sacred with equal fervor!

Oh yes, Elizabeth and Jessica-I read my way through Sweet Valley Kids and Sweet Valley Twins in late elementary/early middle school! What literary character (one of yours or someone else's) would you say was most like you and why?

Ack! The impossible question. So much of character (or how we define character) is shaped by circumstances. Would Melinda in Speak have unearthed her own strength if she hadn’t experienced those very events? I think it’s probably fair to say there’s a little piece of me in each of the TMAS characters—I tend to think everything is meaningful and connected like Miranda, be a little goofy and truthful like Essence, serious like Kamran, hopeful like Nik. All of those emotions come from very real places, even if the events are fictional. I guess that makes sense, considering they all came out of my brain and heart! Both of the primary antagonists were difficult to write until I realized they had secrets, too—secrets that drove their actions and were keys to much of the story.

You know I'm a librarian, so I have to ask, what do you love about libraries/librarians?

Librarians are the most awesome people in the world! (I think so too!) My favorite conferences are with librarians—how can you go wrong with ten thousand people who adore books as much as you do? Plus they are champions of literacy and knowledge. My little one was just a baby when I wrote much of Tell Me a Secret, so I hired a sitter for one day a week and walked to my local branch of the Seattle Public Library to work. The librarians there were so supportive and fantastic, and now they are thrilled to see that book on the shelves! Every librarian I’ve met since then has been equally wonderful—including you, Sarah!


Aww..thanks!:) I love hearing stories from authors about how they went to the library to write-what better place to visit? What was the easiest part of your novel to write, and what was the hardest?

Easiest…that would have to be the first few pages—except the circumstances were anything but easy! I’ve always heard about writers who say, well, my character just started talking and blah blah blah. Which is sort of odd and a little bit annoying, right?? Then it happened to me. In the middle of the night, when I had a new baby and was totally sleep deprived. I think the sleep deprivation may have been key here, because I didn’t have the presence of mind to tell Miranda to shut up until morning! I was just getting to sleep when I heard in my mind, It’s tough living in the shadow of a dead girl. I realized if I didn’t write it down, I would lose it. So I got up, wrote a few pages, and those ended up being the first few pages of the novel.

Hardest…probably the second to last chapter. In the hero’s journey, it’s usually when the protagonist fights his last battle, basically everything you’ve set up as the big problem from the very beginning (in Miranda’s case, that’s the death of her sister, and how that’s impacted everyone in her family). I hate conflict—you’d never know this from a book that spirals from one conflict to the next, but in real life I hate conflict. I knew it was going to be very emotional and challenging to take the story into some kind of resolution. So for the first draft I skipped it! Of course I had to go back later, but by that time I knew the characters much better and could see how all of the secrets could cascade into one final truth. Boowahaha.


What has been the best experience about being published?

Without a doubt, the amazing connection with readers. People write me to say how invested they are in Miranda’s story and how emotionally impactful it is for them, which honestly stuns me. It warms me to the soul. This novel came out of a very difficult personal experience, and to see that it has meaning for others—that there is hope in tragedy…I really can’t think of anything better.

Thank you so much, Sarah, for inviting me to Green Bean Teen Queen!

Thanks for visiting Holly and I hope your tour has been a blast! Don't forget to enter Holly's tour contest!

• Leave comments at any official tour stop or Holly’s blog (www.hollycupala.com) throughout the tour! Each comment counts as an entry (one comment per post*).
• Tweet about the tour (@hollycupala) and tell us what you think!
• Post about the tour, then leave a comment at my blog.
• Prizes available to US/Canadian shipping addresses only.


Each week's prizes will be announced at Holly’s blog the following week - check back to see if you've won and contact us at the contact link at www.hollycupala.com (we will hold prizes for 2 weeks).

* Comment calculation: for instance, during week one you can comment once at every official stop, and once on any of my posts for that week to be entered in that week's prize drawing.