August 09, 2011
Tween Tuesday is a weekly meme hosted here at GreenBeanTeenQueen to highlight great reads for tweens! Join the fun and leave your links below. 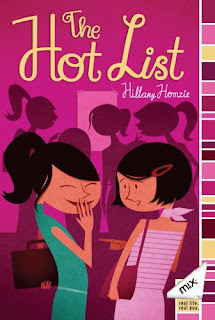 About the Book: Sophie can feel her friendship with best friend Maddie changing now that they're in seventh grade. Maddie is hanging out with popular girl Nia more and Sophie will do anything to keep things the same. So when she suggests posting their secret "Hot List" at the school, Sophie thinks their secret will keep them close. Instead, it propels the "Hot List" into the ultimate decision list for the middle school and now someone else is adding to the list. Not knowing what else to do, Sophie makes a bet with Nia that she can get anyone on the list. So Nia challenges Sophie to transform dorky, not cool Squid into a Hot Lister, or else embarrass herself in front of her crush.

GreenBeanTeenQueen Says: At it's core, The Hot List is a story about friendship. Middle school is a strange time to navigate friendships as people change and find new interests, and Hillary Homzie nails that awkwardness perfectly. You don't want to give up the friends you've always known, but how do you let go and make new ones? And can you actually be friends with someone new? And what about being popular and cool-doesn't that count for everything?

What I liked most was the story with Squid and being true to yourself. This isn't a makeover story where the makeover changes them for good, but instead, the makeover helps them see what was best to begin with.

At times the story seemed to not know exactly what it wanted to be, but it got there in the end. Sophie learns to be confident, which I think middle schoolers can relate to. A fun, light tween read perfect for readers looking for a book about tricky middle school friendships.