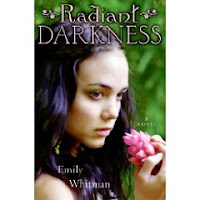 Rating: 4 Stars
Genre: Mythology/Romance
Release Date: 4/28/09
About the Book: Remember that myth about Persephone being taken away by Hades and forced to live as his queen underground? Everyone got it all wrong-and Persephone is going to set the story straight.
Demeter is a strict controlling mother who makes Persephone stay in the vale. She sees Persephone as a child and would never ever allow a man to visit! So when Hades manages to make his way into the vale, Persephone is intrigued. The two start having secret meetings and begin a forbidden romance. When Hades asks Persephone to join him in the underworld, she can't wait to escape. Little does she know that her seemingly small decision will have a big impact on Earth.
GreenBeanTeenQueen Says: The story of Persephone is one of my favorite's in mythology. So when I first heard about this book I knew I had to read it. I was so excited about it, I even did a happy dance in my office when I got it! Emily Whitman's retelling does not disappoint! Radiant Darkness has it all-a strict overbearing mom, a rebellious daughter, a forbidden romance, sacrifice and heartbreak. What teen couldn't relate to something on that list?
Ms. Whitman does a great job of turning the familiar story on it's head and adding new layers. Persephone is believable and readers will find her relatable, despite her mythical background. I loved that she starts as just a normal girl, who’s even a little klutzy! Her transformation throughout is beautifully written and I was cheering for Persephone along her journey.
I also enjoyed reading about Persephone's relationship with a human woman, Melita, who she meets in the underworld. Melita's ideas and influences on Persephone added to Persephone's overall character and made her seem more human.
I do wish there would have been a little more with Hades and Persephone and their budding relationship. At times I wasn't sure if I was supposed to like Hades or not, so more interaction from him would have been nice. What was there between the two I did like for the most part though, and Hades grew on me in the end.
Overall, this was an enchanting debut and I'm sure readers who enjoy mythology or fairy tales will want to pick this one up.